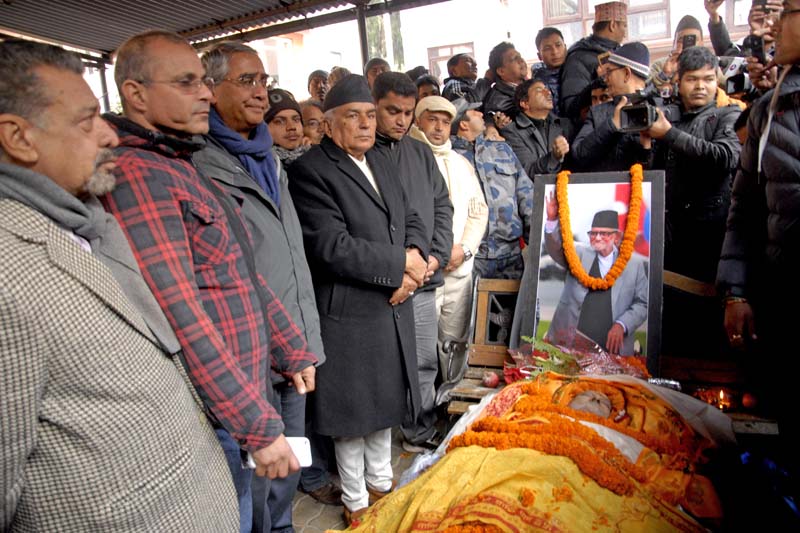 Leaders of the Nepali Congress (NC) huddle around the body of Nepali Congress President and former Prime Minister Sushil Koirala to pay their tributes at Maharajgunj, on Tuesday, February 9, 2016. Photo: Bal Krishna Thapa/ THT
KATHMANDU: The Nepali Congress decided that party President Sushil Koirala would be cremated in Kathmandu on Wednesday. An emergency meeting of the party's Central Working Committee took the decision to this effect. Nepali Congress said its sitting  president, who suffered from chronic respiratory illness and died of cardiac arrest, would be cremated at the newly launched electronic crematorium at Pashupati Aryaghat. The funeral procession would begin from the Dasharath Stadium in Tripureshwor at around 2 pm tomorrow and pass through Putali Sadak, Kamal Pokhari, Maitidevi and Gaushala before reaching the Aryaghat. Meanwhile, the party would hold condolence assemblies across the nation on February 21, the 13th day of his demise. The CWC meeting decided not to organise any programme of the party and sister organisations till February 21. The party flags would be hoisted half-mast till the date. Likewise, offices of the party and sister organisations would be closed till February 15 to observe mourning. Koirala had passed away in the wee hours today. The largest political party in the Parliament has postponed all programmes related to the 13th national general convention till a further notice. The convention was scheduled for March 3-6 in the Capital. Paudel assigned with acting presidency The CWC meeting also assigned party Vice-President Ram Chandra Paudel to work as the Acting President till an election to the next President. Meanwhile, the body of Koirala was being taken to the Dasharath Stadium from the party central office Sanepa to let members of the public pay final tributes to the deceased leader.
#Nepali Congress #final rites #funeral #Pashupati Aryaghat #Former Prime Minister Sushil Koirala
You May Also like: