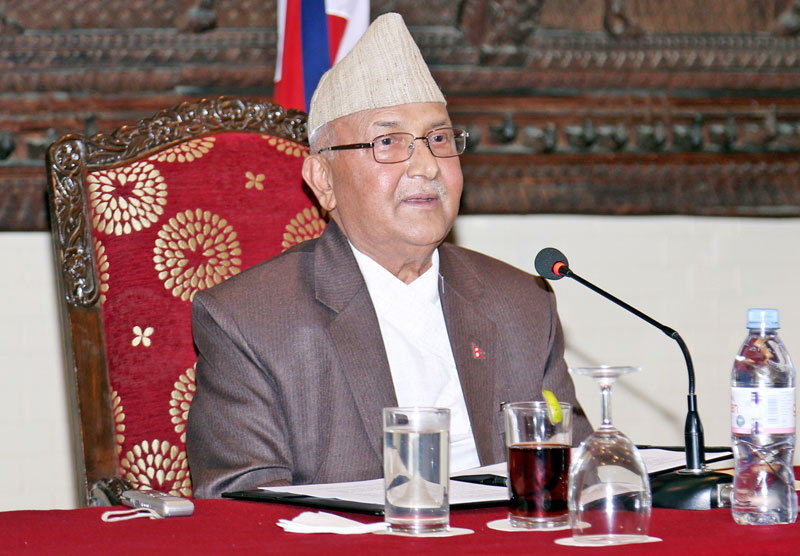 KATHMANDU: CPN-UML Chairman KP Sharma Oli’s scheduled visit to Bangladesh has been cancelled in the wake of impeachment motion against the Commission for the Investigation of Abuse of Authority chief Lok Man Singh Karki.

The former Nepali Prime Minister was scheduled to leave for Dhaka of Bangladesh today to take part in a meeting of Awami League, the ruling party of Bangladesh.

According to a statement issued by party Secretary Krishna Gopal Shrestha, the visit was cancelled due to recent political developments in the nation.

The major parties are holding internal discussion as well as between and betwixt over the impeachment motion.

Yesterday, Speaker Onsari Gharti had cancelled her trip to Geneva.

Earlier on Wednesday evening, as many as 157 lawmakers from the governing CPN Maoist Centre and the main opposition CPN-UML  had registered the impeachment motion at the  Parliament Secretariat against the powerful chief of the anti-graft constitutional body.

The charges against Karki include exercising extra-jurisdiction power. Karki has been suspended after the commencement of the impeachment proceedings.

Making it decision to pass the impeachment motion, the CPN-UML on Thursday issued a whip to its leaders to compulsorily attend the Parliament meeting scheduled for Sunday.

Though the motion, registered by 157 members, was scheduled to be tabled at yesterday’s Parliament meeting and forwarded to the 11-member Impeachment Recommendation Committee that was formed on Wednesday, for further proceedings, it could not be done as Prime Minister Pushpa Kamal Dahal requested Speaker Onsari Gharti Magar to provide time for major parties to come up with a common view on Karki’s issue.

Earlier on Thursday, Commissioner Deep Basnyat took responsibility of the CIAA as the Acting Chief after Karki faced automatic suspension following registration of the impeachment motion.

The largest party in the Parliament, Nepali Congress, however, has not decided on whether to support the impeachment motion filed against Karki.

The party had held a Central Working Committee meeting on Thursday, but did not make any solid decision.

Oli was scheduled to meet Bangladeshi Prime Minister and leader of Awami League Sheikh Hasina during the visit.