Light rainfall likely in Valley until the weekend 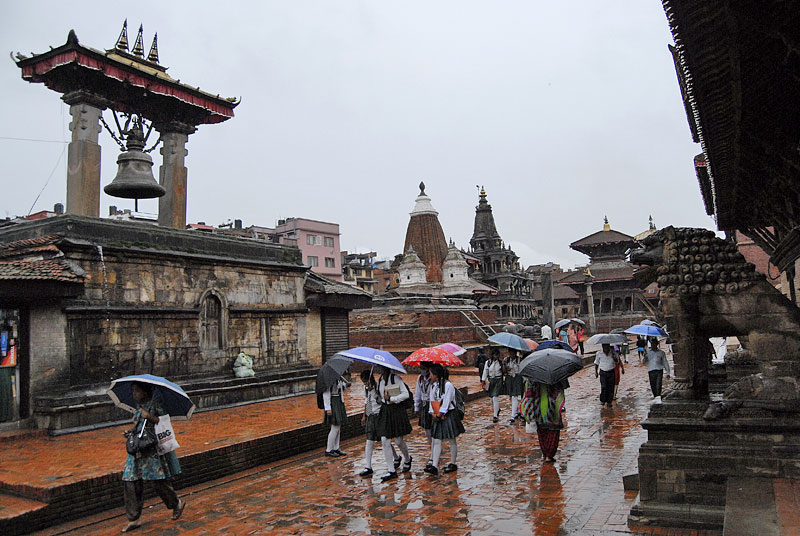 Pedestrians passing through Patan Durbar Square as heavy showers lash Lalitpur, on Sunday, July 5, 2015. Photo: Bal Krishna Thapa/THT
Kathmandu, March 31 The Meteorological Forecasting Division has forecast moderate rainfall in the eastern and central regions of the country for the next two days or three due to change in weather pattern. “A low pressure weather system has formed over the atmosphere of the eastern and central regions and is likely to result in rainfall. The eastern hilly regions may experience thundershowers coupled with strong wind and hail in some areas,” a special weather bulletin released by the MFD said. A meteorologist at the MFD said the Kathmandu Valley is expected to receive brief rain until the coming weekend. The Cumulonimbus clouds blanketing the sky in the hilly areas during the pre-monsoon and monsoon usually cause hail, thunderstorms and lightning. If the Valley receives adequate rain, the thick haze in the sky will settled, he informed. The sky in the Valley remains blanketed since the past few weeks. Favourable winds also help clear the haze. Meanwhile, Kathmandu received 3.8 mm rain in the last 24 hours ending 5:45 pm today. The average monthly rainfall for the Valley in March is 34.2 mm but it received only 10.1 mm rain until the end of this month, said the MFD.
#Meteorological Forecasting Division (MFD) #Kathmandu weather #Light rainfall
You May Also like: