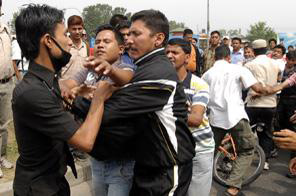 Unified CPN (Maoist) cadres rough up a bystander at Maitighar Mandala on Sunday during their sit-in demonstrations in front of government offices to prevent civil servants and service seekers from entering offices across the country. Their phase wise protest programme has been launched against the Presidentâ€™s move to block the erstwhile governmentâ€™s decision to dismiss the army chief. Source: Naresh Shrestha

KATHMANDU: The UCPN-Maoist has organised a gherao outside the main administrative centre, Singha Durbar, and all offices of public concern on Sunday protesting the present government's action against all decisions of the previous Maoist-led government. The CPN-UML-led government opposed the Maoist-led government’s decision to dismiss CoAS Katwal and declared the President’s move as constitutional.
At the same time, they have scheduled sit-in protests outside Singha Durbar's east and south gates. A large number of police personnel has been deployed to avoid any untoward incidents. The home ministry has given directions to allow peaceful protests, but to use maximum force in case of forcible disruption of the normal functioning of the offices. Security has been heightened in places where administrative offices, Road Board, District Development Offices and revenue offices of Bhaktapur, Kathmandu and Lalitpur are located.