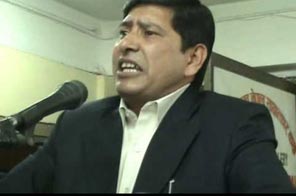 KATHMANDU: The taskforce of main opposition UCPN-Maoist today submitted its amendment proposal to the draft of consensual sankalpa prastav jointly prepared by the Nepali Congress and CPN-UML.

The taskforces of the ruling NC and UML had prepared the drafts of the consensual sankalpa prastav on October 3.

Keshav Badal, a member of the UML taskforce, said the Maoists proposed that the

President’s “unconstitutional move” on reinstating the then Chief of Army Staff, General Rookmangud Katawal, who

was sacked by the Prachanda-led government on May 3, should be the agenda of discussion in the proposal. Narayankaji Shrestha, vice-chairman, UCPN-M, said they had submitted a text to the UML taskforce for correcting the draft proposal.

The earlier prepared four-point draft of the sankalpa prastav only stated stances of both the Maoists and the ruling parties on the president’s move in the background. The Maoists have, however, maintained that the president’s issue should not just be a background, but a part of the sankalpa prastav. Bharat Mohan Adhikari, UML taskforce coordinator, said the Maoists came up with two options: dealing all the problems in question in a package or sorting out them one-after-another. As per the first option, the Maoists proposed resolving the key issues resulting the stalemate, the ongoing peace process and constitution drafting process in a package. The second option is to deal with these issues separately.