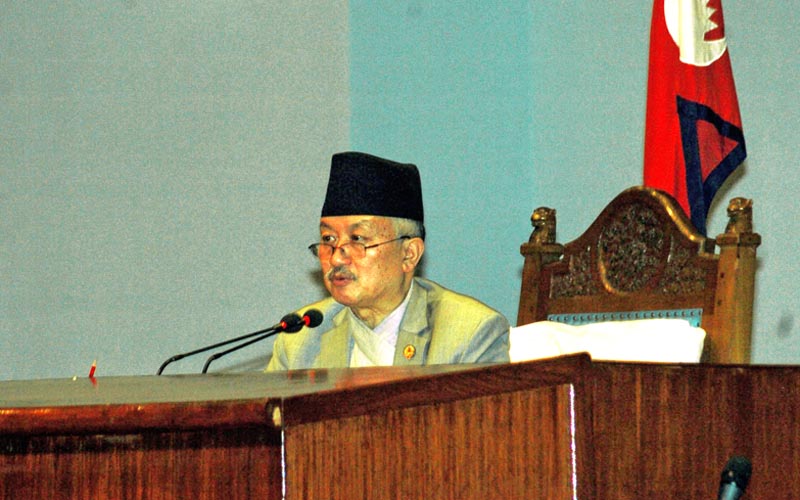 CA Chair Subas Chandra Nembang speaking during the voting process in the CA Hall on Wednesday, September 16, 2015. Photo: Dhurba Ale/ THT
KATHMANDU: Speaker Subas Nembang has said that peoples' long awaited dream of writing constitution by their own representatives was materialised with the promulgation of a new constitution from the Constituent Assembly. It was a long awaited dream since 1950, he added. While addressing the 20th assembly of Nepal Association of Tour and Travel Agents (NATTA) here today, Speaker Nembang added that the CA, the directly elected body, promulgated the new constitution and institutionalised the republic, federalism, inclusive democracy and secularism for the first time in the country’s history. He added that the newly issued constitution has provided the broadened path for tourism development. The Speaker further said that the constitution was issued in the presence of 89 per cent lawmakers and 85 per cent lawmakers had participated in the voting process. It has ensured the rights of all the ethnic and religious communities, the leader added. Similarly, Minister for Culture and Tourism, Kripashur Sherpa, expressed confidence that the NATTA assembly would be able to spread a positive message that the tourism sector in the country is safe even after the devastating quake. He further expected suggestions for policy-level reformation in the sector. Likewise, NATTA chair DB Limbu said that the assembly would be able to remove the illusion that the tourism sector was badly affected after the quake.
#new constitution #earthquake #Constituent Assembly #federalism #Subas Nembang #Nepal Association of Tour and Travel Agents #Minister for Culture and Tourism #Kripashur Sherpa
You May Also like: