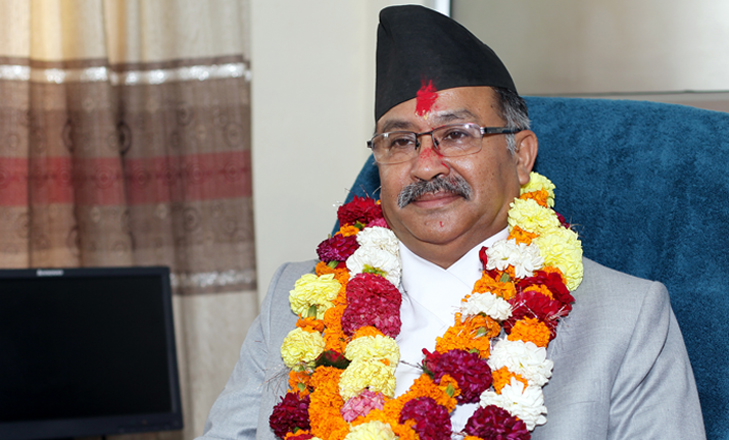 Chief Justice Kalyan Shrestha after assuming his office in the Supreme Court on his first day as the Chief Justice, Wednesday. Photo: RSS
KATHMANDU: New Chief Justice Kalyan Shrestha on Wednesday said the judiciary would not play politics with anybody and others should not play politics with it. His comments came at a time when some politicians are criticising the Supreme Court for issuing an interim order against the implementation of 16-point agreement and accusing the judiciary of playing politics. Talking to mediapersons after taking over as new Chief Justice of the Supreme Court, Shrestha said he would have zero tolerance against corruption. He, however, said allegation of corruption must be supported by evidence. Earlier, he was administered the oath of office and secrecy by President Ram Baran Yadav at Shital Niwas. The new CJ said he would strive for ensuring judiciary’s financial and administrative autonomy. “Supreme Court should have enough budget and it should have powers to frame its own rules,” he said and added that although the cases had almost doubled at the apex court in last nine years, it was delivering justice with the same number of judicial staff and resources. “The judiciary is not getting more than 0.05 per cent budget. This should be increased,” he added. He urged the Legislature Parliament to pass new Civil Code Bill and Penal Code Bill. “We are delivering justice on the basis of most of our laws that were enacted during Rana regime and this is the reason we cannot deliver justice compatible to modern norms. The only thing we can do is to neutralise the effects of old time,” Shrestha said and added that everybody should try to help pass the civil and penal code bills. Outlining a list of possible reforms, the new CJ said he was committed to devoting his efforts to form a judicial oversight committee to prevent anomalies in the judiciary. Shrestha has a reputation of issuing landmark verdicts. He was a member of the SC bench whose decision prevented the first Constituent Assembly from extending its term inordinately. He had ruled that identity of HIV/AIDS victims, and victims of violence particularly women and children should be kept secret in order to protect their rights.
#Supreme Court #16-point agreement #HIV/AIDS #New Chief Justice Kalyan Shrestha
You May Also like: