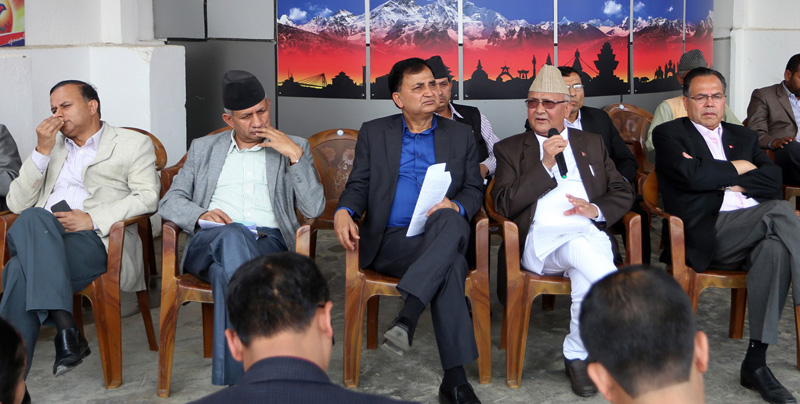 CPN-UML Chairman KP Sharma Oli (2nd from right) among other leaders addresses a press meet at his party office, Dhumbarahi of Kathmandu, on Saturday, April 16, 2016. Phto: RSS
KATHMANDU: Prime Minister and CPN-UML Chairman KP Sharma Oli reminded the main opposition Nepali Congress to comply with a gentlemen's agreement, in which the major parties had reportedly agreed to form the UML-led government after the Constitution promulgation. The UML had claimed leadership of the post-Constitution government last year claiming that the parties had agreed so. The then Nepali Congress President late Sushil Koirala, however, had refuted reports of the agreement. Consequently, Koirala and Oli had fought for the premiership, when Oli was elected the top executive of the nation. More than four months after the government formation, Oli today remembered the agreement and urged the NC to join the government led by him. He was speaking at a press conference organised at the party headquarters today to share decisions of the party's Central Committee meeting concluded on Friday. Claiming himself still ready to incorporate the NC in the government, Oli also revealed that discussions were underway with the strongest party in the Legislature in a bid to bring it on board the government. Meanwhile, the UML Chairman reiterated that factionalism was not much present in the party, but media exaggerated the issue. "There is no factionalism among us," he said, "But, it has been exaggerated in the newspapers." READ ALSO:
#Nepali Congress #CPN-UML Chairman KP Sharma Oli #coalition government #Nepal's Constitution 2072 #gentleman’s agreement #UML Central Committee meeting
You May Also like: