The April 25 earthquake and its aftershocks not only killed thousands of people, it also devastated Nepal’s cultural heritage sites and monuments, around which people’s faith was centred.

Besides drawing tourists from around the world, they also comprised a key source of income and livelihood for many.

The tremors destroyed 753 monuments, temples, monasteries, old palaces and other landmarks such as Dharahara. These include seven UNESCO-listed world heritage sites. Among them the most severely damaged were: Swoyambhunath, Kathmandu Durbar Square, Patan Durbar Square, Bhaktapur Durbar Square, Baudhanath and Changunarayan, while Pashupatinath temple escaped major destruction. According to the Post Disaster Need Assessment report prepared by the government, 2,900 structures with cultural, historical and religious significance were affected.

The damage to the monuments and heritage sites was valued at 16.9 billion (US $ 169 million) rupees, according to a report. It is estimated that the cost of their reconstruction will total to US $ 205 million over six years.

As the country marks a year of devastation, these monuments are still piles of broken wood, old bricks and other debris, which have not been cleared yet. In January, the government said it will reconstruct Dharahara with local resources and the President initiated the reconstruction work with much fanfare at Ranipokhari temple. However, the actual construction of these monuments is yet to begin. 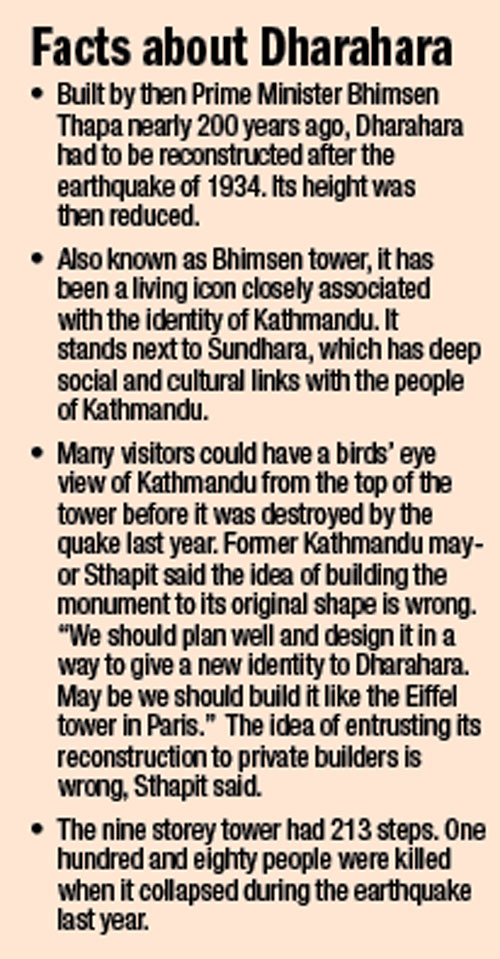 It will be wrong to restore these monuments without consulting the people or taking the people into confidence, according to sociologist Sanjeev Pokharel.

“They are not only landmarks of our country but they are connected with faith, belief, traditions and sentiments of the people. Heritage sites are Nepal’s treasures and the government has not consulted cultural and historical experts and the local community on how to restore them. The reconstruction process is superficial and dry,” he said.

Divisional engineer of Department of Archaeology Sampad Ghimire said, “The Department called a tender to reconstruct the monuments.

Former Mayor of Kathmandu Metropolitan city Keshav Staphit said the government is not prepared to restore these artifacts. “The government must have a masterplan for the restoration of different monuments and mobilise resources towards this end,” he said, adding that the government has failed to generate enough funds to rebuild Dharahara on its own under a “I will rebuild my own Dharahara” campaign unveiled by Prime Minister KP Oli in February.

Had the government won the confidence of people and convinced them, they would have come up with contributions to the fund for reconstruction of Daharahara.

The fact that just 2.4 million rupees has been collected so far indicates that either people do not trust the government or the government is not sincere about what it says.

The collected amount includes the contribution of salary made by cabinet members and officials, but only 15 members of the public have contributed to the fund, according to Nepal Reconstruction Authority officials.

But Ram Prasad Thapaliya, spokesperson of the NRA, said public response will be favourable once the plan and the designs for rebuilding are finalised. “We believe that people will be forthcoming with their support and there will be no dearth of money,” he said.