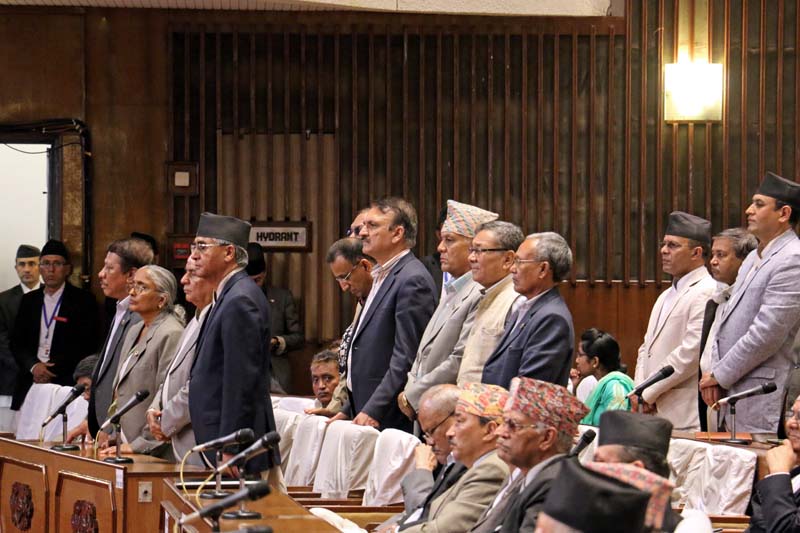 Leaders of the main opposition party, Nepali Congress, obstruct the Parliament session held on Monday, June 27, 2016. Photo: RSS
KATHMANDU: The Parliament meeting scheduled for 11 am on Wednesday has been postponed for 2 pm. It has been learned that Prime Minister KP Sharma Oli would address the House when it resumes today. The task force formed by the ruling parties and main opposition Nepali Congress (NC) held a meeting this morning to resolve the existing differences between the two sides. The meeting, however, failed to make any concrete decision in the morning. The task force had held many rounds of meeting yesterday also to clear the way for ending House disruption by the NC. Senior leaders of the three major parties including CPN-UML Chairman and Prime Minister KP Sharma, Nepali Congress President Sher Bahadur Deuba and CPN Maoist Centre Chairman Pushpa Kamal Dahal had also held a separate meeting yesterday. Stating that the government has failed to proceed with the task of reconstruction of earthquake-damaged houses, the NC has been obstructing the House business for the past few days. The NC has been demanding that the government provide a lump sum of Rs 200, 000 to earthquake survivors to rebuild their houses.
#earthquake victims #Nepali Congress #Parliament meeting
You May Also like: