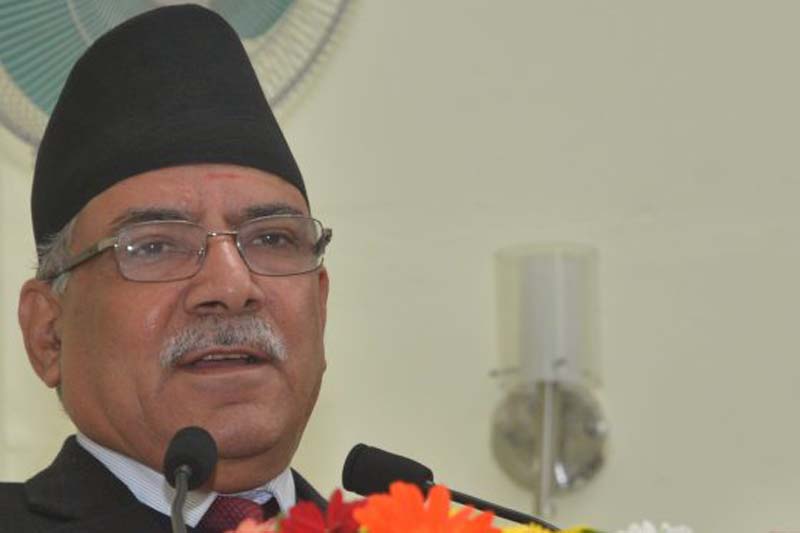 Prime Minister Pushpa Kamal Dahal addresses his party cadres in Surkhet, on Friday, December 10, 2016. Photo: PM's Secretariat
KATHMANDU: Prime Minister Pushpa Kamal Dahal has said some political parties were plotting against institutionalisation of people's rights documented in the Constitution. Addressing a cadres' training programme organised by his party--CPN Maoist Centre--Province No. 3 committee here Monday, PM Dahal urged the cadres to visit people and advocate issues of change for the institutionalisation of people's rights. The Maoist Chairman said, "Conspiracy is being hatched against the Maoist party. Some parties and leaders have been carrying out activities against federalism, republic and inclusiveness. Earlier too, they had not accepted the changes by heart." Clarifying that the recent Politburo meeting of the party has given an outlet to the stalemate in the organisation, he said, "Let's focus our attention to develop the base for the systematic organisation from upcoming convention and let's engage with people by launching a campaign." On the occasion, leader Narayan Kaji Shrestha urged the leaders and cadres to give up the trend of becoming city-centric because time had come for strengthening the organisation from the very grassroots. Likewise, leaders Ram Bahadur Thapa, Barshaman Pun, Haribol Gajurel, Agni Sapkota and Dinanath Sharma, among others expressed their views at the training.
#Pushpa Kamal Dahal #Narayan Kaji Shrestha #CPN Maoist Centre #People's rights
You May Also like: