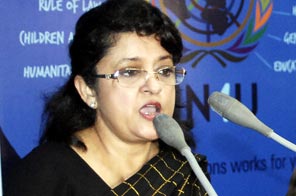 KATHMANDU: Prime Minister Madhav Kumar Nepal asked Deputy Prime Minister and Foreign Affairs Minister Sujata Koirala for a clarification over her view on federalism on Sunday.
In a meeting of the Constitutional Committee, the PM sought the DPM's clarification in front of the journalists over her statement. But Koirala refused to reply to the journalists' queries. In Saturday's special press meet organised by the Reporters Club in the capital, she had stated that a referendum was necessary before going for federalism in the country.
However, the PM explained that her view is not the official view of the government.