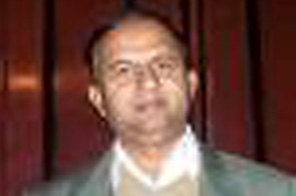 KATHMANDU: Minister for Information and Communications Shankar Pokharel on Saturday said he would do as much in his power to support the institutional development of the media.
Speaking at a function organised by the Federation of Nepali Journalists to
congratulate his appointment as the new minister here today, Pokharel stressed on the importance of the media’s role for the safe landing of the country
from the current instable transitional phase.
He said there was no alternative to implementing the minimum wage for journalists as per the Working Journalists Act, which had been repeatedly brought up by the journalists.
Pokharel also said the country would move forward towards progress and prosperity if everyone moved ahead with positive thinking.
Suresh Acharya, president of the Minimum Salary Determination Committee,
said the committee had already determined minimum wages that would help end exploitation.
President of the FNJ Dharmendra Jha urged the government to create a congenial environment for journalists to carry out their duties and freedom of expression.
Former general secretary of FNJ Mahendra Bista said the government should pay special attention to ensure security to journalists as they had been a target of constant assaults and threats.
President of Press Union Sameer Jung Shah urged the government to demonstrate strong will power for the implementation of the Working Journalists Act.
President of Press Chautari Shambhu Shrestha said
the increase in the number of journalists and media houses was not the only indicator of the development of the media. Shrestha also said no government had paid attention to the development of the media.
Speakers at the function opined that both the working journalists and the owners of media houses would benefit from the implementation of the Working Journalists Act.
Yubaraj Bidrohi, president of Kathmandu branch of FNJ also spoke on the occasion.