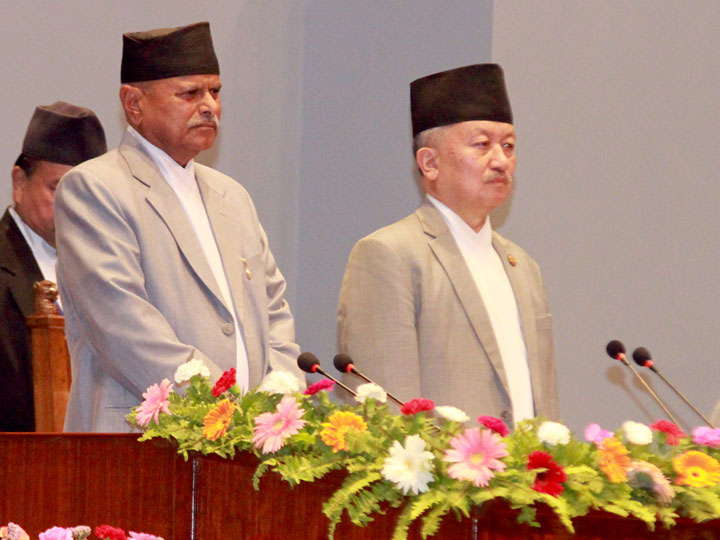 President Ram Baran Yadav and Speaker Subas Chandra Nembang stand at attention while the national anthem is played before the President presents the government's annual policy and programmes at the Parliament, on Wednesday, July 8, 2015. Photo: RSS

KATHMANDU: President Ram Baran Yadav unveiled the government's policy and programmes for the upcoming fiscal year 2015/16 in the Parliament on Wednesday afternoon.

Prime Minister Sushil Koirala had handed over the policy and programmes to the President.

Thanking the government employees, public and international communities for their efforts in the rescue and relief operations after the devastating earthquake, the President said that the government would prepare short-, mid-, and long-term working plans for the reconstruction of the country.

disasters and increase the capabilities of the security forces for natural disaster management, he added.

Financial resources will be mobilised through both public and private sectors to execute recovery and reconstruction works. Involvement of cooperatives and communities will be encouraged.

Reconstruction works will be carried out in tourist destinations also.

The government will provide livelihood support to landless people and members of marginalised communities through cooperaives.

Pension system would be reformed by introducing a contributory mechanism, under which deductions will be made to salaries of government employees to make regular contributions to the pension fund.

Alternative energy technologies will be promoted and the load-shedding will be restricted to eight hours a day.

Nepal Electricity Authority and Water and Energy Commission will be reconstructed.

The government will discourage budget spending without any feasibility study, while pending development projects will be completed on time.

The National Seismological Centre will be equipped with modern structures and technologies.

The President also announced to free Kathmandu Valley of street children and conduct regular monitoring to reduce child labour. Likewise, senior citizen allowance would also be increased in the next fiscal year.

Meanwhile, the President expressed his hope that all political parties and other external stakeholders cooperate with the Constituent Assembly to issue a democratic constitution on time.

The letter from the Office of the President regarding the programme to unveil the government’s policy and programmes was received by the Speaker of the Legislature Parliament Subas Chandra Nembang on July 4.

The House meeting has been postponed for half-an-hour.