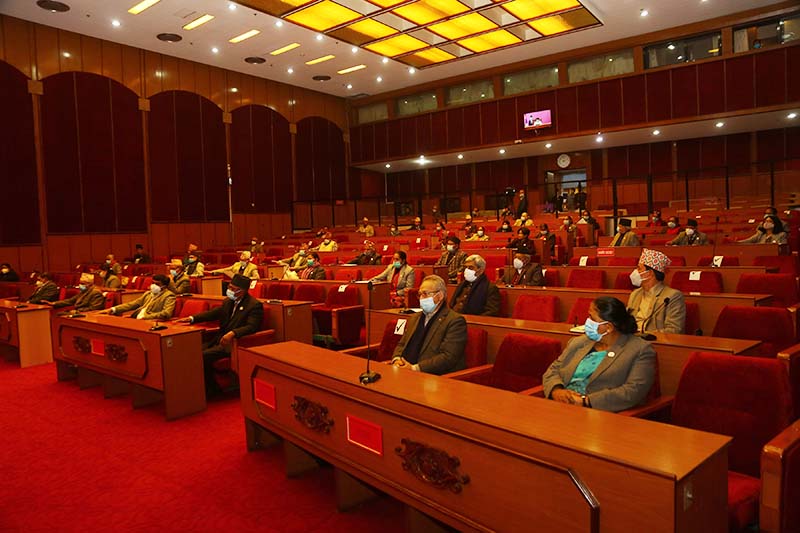 Lawmakers of various parties attend the first meeting of the seventh session of National Assembly in Kathmandu, on Friday, January 1, 2021. Photo: RSS
NC lawmaker Jitendra Narayan Dev termed the dissolution of the HoR as an unconstitutional and undemocratic act, while JSP-N lawmaker Pramila Kumari termed it as a repeat of royal coup d’etat staged by the then king Mahendra against the constitution. Ruling Nepal Communist Party (NCP) lawmaker Dinanath Sharma said it was unfortunate that the HoR was dissolved due to the intra-party wrangling. Dev said the new constitution did not give powers to the PM to dissolve the House until there was a possibility of forming an alternative government, but the PM acted unconstitutionally to dissolve the Lower House. House dissolution has imperilled the federal, democratic and Republican constitution that was framed as a result of great sacrifices of countless people. “The PM faced challenge from within his party, but he victimised the entire country for his own problems. The PM should have either commanded majority in the party or he should have allowed another leader who commanded majority to become the Parliamentary Party leader,” Dev said. “The PM’s decision to dissolve the House is a result of his lust for centralising power and our party had warned everybody of the PM’s authoritarian attitude when he brought National Investigation Department, Department of Money Laundering Investigation and Inland Revenue Department under him,” he added. Dev said unity and nationality would be strengthened by making democracy inclusive, but communist forces always harp on nationality, undermining inclusive democracy. He added that the ordinance amending Constitutional Council Act should be rescinded because it undermined the spirit of the constitution that had incorporated provisions to check the executive’s monopoly in making appointment to constitutional bodies. He also sought the government’s response on Barshaman Pun’s allegation that it was tapping phones of political opponents. Dev also said that the government must forge national consensus on the country’s foreign policy, security policy, and water resource policy. JSP-N lawmaker Pramila Kumari said both the PM and the president took an unconstitutional step to dissolve the HoR. She said the PM had no stake in the federal, democratic, and republican constitution, as he was always against these changes. NCP lawmaker Dinanath Sharma said the split in the NCP posed a challenge to the current political system and could also lead to a situation where people’s rights would be curtailed. Minister of Home Affairs Ram Bahadur Thapa, Minister of Health and Population Hridayesh Tripathi, and Minister of Law, Justice, and Parliamentary Affairs Lilanath Shrestha tabled the recent ordinances to amend laws relating to acid attack, Constitutional Council Act, and registration of companies for the supply of COVID-19 vaccines. The next NA meeting has been scheduled for January 7.
#Nepali Congress #National Assembly #House of Representatives #Prime Minister KP Sharma Oli #Janata Samajwadi Party-Nepal
You May Also like: