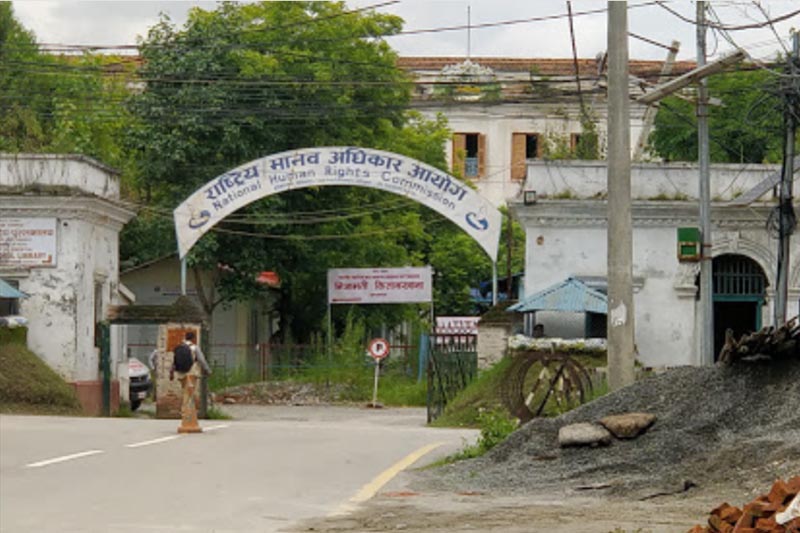 This undated image shows the entrance gate and the building of National Human Rights Commission, in Pulchowk, Lalitpur. Photo courtesy: Raunak Maskay
Kathmandu, March 15 The National Human Rights Commission today warned that general consumers were deprived of fully enjoying the rights guaranteed by the constitution and prevailing laws. In a press statement issued by the rights body coinciding with the World Consumer Rights Day, the NHRC said that the concerned agencies responsible for monitoring and regulating consumer rights had failed to perform their duties and responsibilities, and to combat the production, sale and supply of substandard goods, food adulteration, overcharging, profiteering and black-marketing. Consumers have the right not only to be safe, be informed and to select but also to be heard, compensated and to receive consumer education. “Though the concerned agencies claim to have been controlling, monitoring and regulating the unethical trade practices, they are still far behind in delivering effective results,” the statement reads. It said that even the performance of the monitoring and regulatory bodies was not up to the mark in terms of checking the quality standards of food commodities and maximum residue limits of pesticides for want of technicians and technology. The NHRC also said that farmers were not getting appropriate value of agricultural products produced by them and consumers did not have any option other than to buy such products at higher prices due to the lack of easy supply and effective price determination of consumer goods.  The rights body painted a similar picture of health institutions which it said were still facing insufficiency of doctors, health workers, necessary equipment and drugs, among others. “Financially disadvantaged groups do not have proper access to health services. Despite this, the concerned agencies have not paid heed to make the privately-run health institutions accountable,” it said. According to the NHRC, concerned agencies have not taken any initiative to ensure the supply of essential goods like liquefied petroleum gas and smooth delivery of health services to consumers even as LPG dealers and doctors halted their business. “Eateries along the national highways continue to sell unhealthy foods and defraud the consumers. The government has failed to regulate the misleading advertisements and break the syndicate and cartel. Banks and financial institutions have fixed lending interest rates wilfully. However, the concerned body has not been able to initiate action against those involved in violation of consumer rights,” the rights body said, adding that the general public had yet to have access to right to education. The NHRC has also urged the government and all stakeholders to guarantee protection of consumer rights by implementing the national and international laws in force. The  World Consumer Rights Day is marked every year on March 15. According to Consumer International, unhealthy diets are linked to four of the 10 biggest causes of death worldwide.
#Human rights #National Human Rights Commission #NHRC #consumer rights #general consumers
You May Also like: