Security stepped up for Mahashivaratri 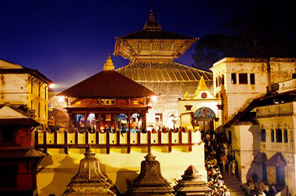 Police have stepped up security arrangements in and around Pashupatinath temple for the annual Mahashivaratri festival and warned they would act tough on those indulging in illegal activities, including trading in marijuana, bhang, hashish and alcoholic beverages on the pretext of celebration.

The Mahashivaratri festival will be observed tomorrow. According to the Metropolitan Police Range, Teku, over 6,000 police personal in uniform and civvies from Nepal Police, Armed Police Force and National Investigation Department have been mobilised to maintain law and order from today. The new security arrangement will be effective till Saturday. Pick-pocketing and snatching suspects are under constant watch.

Possession, sale, distribution and smuggling of marijuana and other narcotics are punishable under Narcotic Drugs (Control) Act, 1976.  Sadhus are usually found smoking pot around Pashupatinath temple, but some youngsters too indulge in marijuana, hashish and other drugs on the pretext of Mahashivaratri.

SP Pradhyumna Kumar Karki warned that anyone caught trading in marijuana or other psychoactive drugs will be brought to book under the Act. According to Pashupati Area Development Trust, only sadhus and saints who have travelled to Pashupatinath temple, one of the holiest Hindu sites, from various parts of Nepal and India will be permitted to consume marijuana and hallucinating substances on religious grounds.

However, they will be strictly barred from selling marijuana and other such substances to youngsters and devotees and will be punished as per the existing laws if found doing so. Similarly, sadhus found involved in suspicious activities will be evicted from the premises of Pashupatinath temple, said the PADT.

The PADT said all four gates of the temple will remain open for devotees from 3:00am tomorrow. Officials have made arrangements for four routes  — Battisputali-Gaushala-Pinglasthan-Sothern Gate, Airport-Tilganga-Ram Mandir-Eastern Gate, Mitra Park-Gaurighat-Umakinda-Basuki-Northern Gate and Jayabageshwori-Bhuwaneshwori-Westen Gate — for devotees to enter the temple.

It said all preparations for Mahashivaratri were over and informed that over 1.2 million devotees were expected to visit the temple.

The Metropolitan Traffic Police Division has declared Chabahil-Mitra Park-Gaushala-Battisputali, Ratopul-Gaushala and Gaurighat road sections no-go zones for vehicles, except for emergency ones.

As the country is preparing to celebrate Mahashivaratri tomorrow, devotees and Sadhus have started thronging Pashupatinath temple.

Hundreds of sadhus from across the country and various parts of neighbouring India have arrived at the temple and are taking shelter on the temple premises, including Bankali and Pashupati area.

Pashupati Area Development Trust said around 4,000 sadhus were expected to arrive at the temple for Mahashivaratri celebrations. One can see sadhus with their faces smeared with ashes and smoking marijuana.

There is a trend of bidding farewell to sadhus by giving them offerings and money following the conclusion of the festival.

Meanwhile, arrangements for accommodation and food have been made for pilgrims and sadhus, said the PADT.