Senior-most Justice Joshee back to work 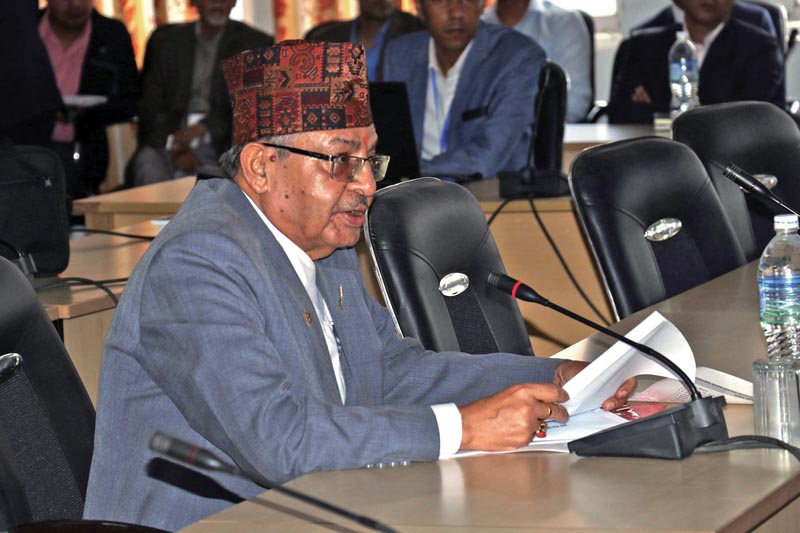 Acting Chief Justice Deepak Raj Joshee responding to Parliamentary Hearing Committee members queries, in Kathmandu, on Thursday, July 27, 2018. Photo: THT
Kathmandu, September 11 Senior-most Justice of the Supreme Court Deepak Raj Joshee, who had gone on leave after being rejected by the Parliamentary Hearing Committee on August 3, returned to work today. He signed his name in the justices’ attendance book, but did not get any case assigned to him today. New Chief Justice Om Prakash Mishra told THT that he did not assign any case to Joshee today because when he was assigning cases to justices in the morning, the court record showed that Joshee was on leave. “This was the only reason I could not assign him any case today,” Mishra said when asked why Joshee was not assigned any case today. Joshee also told THT that he had applied for home leave on Sunday for four days and that was the reason the court record showed that he was on leave today. “I had sought four days leave last time thinking that the PHC hearing would go on for a few days,” he said. The PHC confirmed Mishra appointment as chief justice yesterday and he took charge of the judiciary’s top post the same day. When PHC rejected Joshee for chief justice in August, some ruling Nepal Communist Party (NCP)  leaders had demanded Joshee’s resignation and had threatened to impeach him if he did not quit his job. They had argued that the PHC had raised question on Joshee’s competency in the rejection decision that barred him from working as a justice. PHC member Suman Raj Pyakurel, who represents the NCP (NCP) in the panel, told THT that the PHC had rejected Joshee just for the post of chief justice and not justice of the Supreme Court. “It is not a legal or even a moral question for Joshee to resign,” said Pyakurel, who was among the party members in the PHC to vote for Joshee’s rejection. He said some people might have thought that Joshee would not continue his job as a justice after he was rejected by the PHC for the post of chief justice, but it was his right to continue working as a justice. “I do not think our party or the Parliamentary Party would object to Joshee continuing as the senior-most justice of the SC. If any NCP (NCP) member has threatened to impeach Joshee, then it is his/her personal view. Our party has not discussed it,” he added. Senior Advocate Dinesh Tripathi said Justice Joshee was rejected as CJ nominee and not as a justice. “This means he is not barred by law or the constitution from serving as a justice,” he said, adding, “Now that Justice Mishra, who ranked after Joshee on the seniority list, has been appointed the CJ, it is up to Joshee to continue his job or to resign,” he said and added that in India, justice SR Khanna, who was the senior-most justice, had resigned in protest of Indira Gandhi government’s decision to nominate a junior justice as the chief justice. Joshee would retire from service after a year.
#Parliamentary Hearing Committee #Deepak Raj Joshee #PHC #Senior-most Justice
You May Also like: