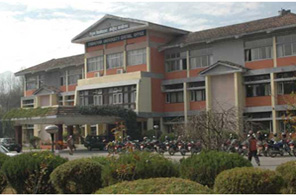 Kathmandu, February 12 Tribhuvan University, the country’s oldest and biggest university, has started consultations with student unions regarding Free Student Union polls, which have not been held for the past seven years. The TU has formed a three-member poll preparation committee under the coordination of Rector professor Sudha Tripathy. The committee held discussions with All Nepal National Independent Students Union-Revolutionary aligned to three political parties Unified CPN-Maoist, CPN-Maoist and CPN (Maoist)  yesterday with a view to holding the FSU polls at the earliest. Professor Tripathy said, “We talked to three ANNISU-R regarding the date for FSU polls, election system and sought suggestions on how to create conducive environment for the polls.” She said the student unions were for conducting the FSU polls at the earliest. Ramesh Malla, chairperson of ANNISU-R aligned to the Unified CPN-Maoist today said they have suggested to the TU to announce the date for FSU polls after holding consultations with other student unions. He said they also urged the TU to finalise the academic calendar before the polls. “TU should first finalise the academic calendar so that we can propose a date for FSU polls. The polls should not hamper academic activities,” he said. According to Malla, they want the TU to set age bar for candidates vying for various posts in the FSU polls. “We also urged the TU to develop a mechanism to take action against campus chief and election officials involved in election irregularities,” he said. Meanwhile, professor Tripathy said the committee will hold another round of meeting with other student unions on Sunday.