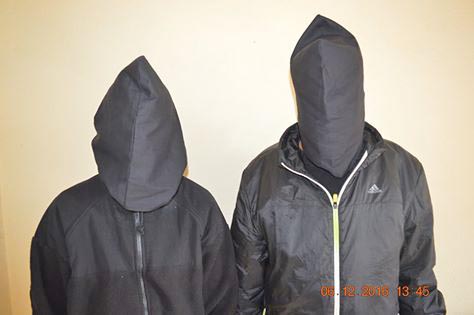 The suspects were paraded by the Metropolitan Police Range, Lalitpur.
KATHMANDU: The Lalitpur-based Metropolitan Police Range said it has recently arrested two persons who are accused of defrauding several individuals of a total of Rs 13.865 million. The suspects are identified as Manoj Bahadur Singh aka Anup (48) of Lalitpur and Ramesh Kumar Khatri Paudel (38), a permanent resident of Sarlahi but currently residing in Chabahil of Kathmandu. According to police, the duo had set up an office with the name Siddhidata Enterprises at Imadol of Lalitpur to operate their con business. Most of their victims are foreign job aspirants. They allegedly won trust of their gullible targets by showing off and claiming that they had access to big shots in the country. According to police, Singh swindled one Anuradha Shaha of KMC-10 of Rs 3.9 million on the pretext of selling a plot of land in Imadol, while other victims wanted to go abroad. Singh was detained from an undisclosed location on December 3 and Khatri the following day.  They were presented before the Lalitpur District Court and remanded in custody for further investigation, police said. They swindled the youth who wanted to go abroad -- particularly the United States, the United Kingdom and Japan, of money -- from Rs 2,00,000 to Rs 3 million. A 35-year-old man from Parbat district paid them Rs 3 million hoping for an opportunity to sneak into the United States. Likewise, three youth from Piple VDC of Tehrathum were assured that they would be embedded with a minister for a visit to the United States of America before they were made to pay a Rs 3.335 million, only to be duped.
#Lalitpur #Kathmandu crime #Metropolitan Police Range #swindling #fraud #swindler #Lalitpur Metropolitan Police Range #con men
You May Also like: