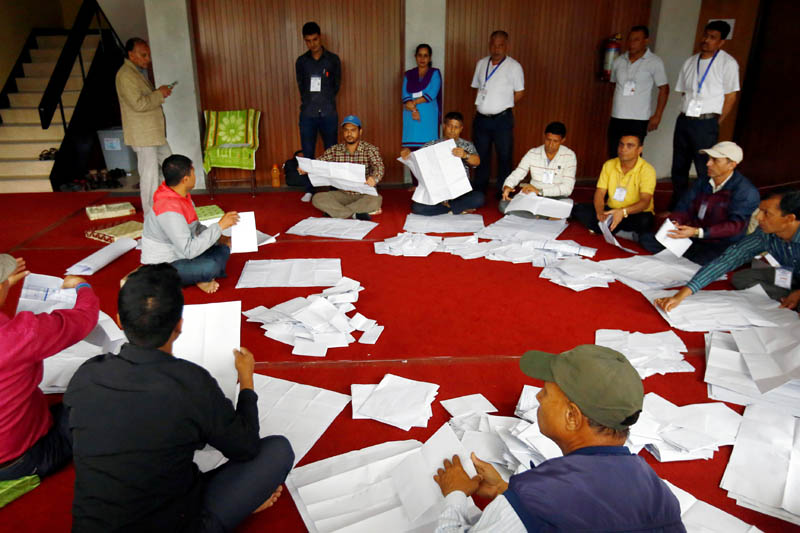 File: Officials from the election commission count votes a day after the local election of municipalities and villages representatives in Kathmandu, Nepal May 15, 2017. Photo: Reuters
KATHMANDU: The Election Commission has informed that 5960 local representatives have been elected as of 10:00 am Friday, saying the counting of votes in 161 local bodies has concluded. However, the counting of votes is underway as the local level polls were held to select representatives in 281 local bodies of 34 districts of Province 3, 4 and 6 on May 14. The second round of elections will be held in 41 districts of Province 1, 2, 5 and 7 on June 14. According to the consolidated data of the first round of local polls, 161 mayors and chiefs, 161 deputy mayors and deputy chiefs of Municipalities and Rural Municipalities, 1,322 ward chairs, 2,192 ward members, 1,095 women members and 1030 Dalit women members were elected from these local levels. Similarly, EC spokesperson Surya Prasad Sharma further informed that the election is taking place at Humla Secondary School voting centre of Kharpunath Rural Municipality today as it was postponed there due to a demise of a candidate. READ ALSO:
#Election Commission #Local representatives #Local level polls update #Nepal polls update #winners in local polls #Municipalities and Rural Municipalities of Nepal
You May Also like: