Another study says warming may be worse than experts think 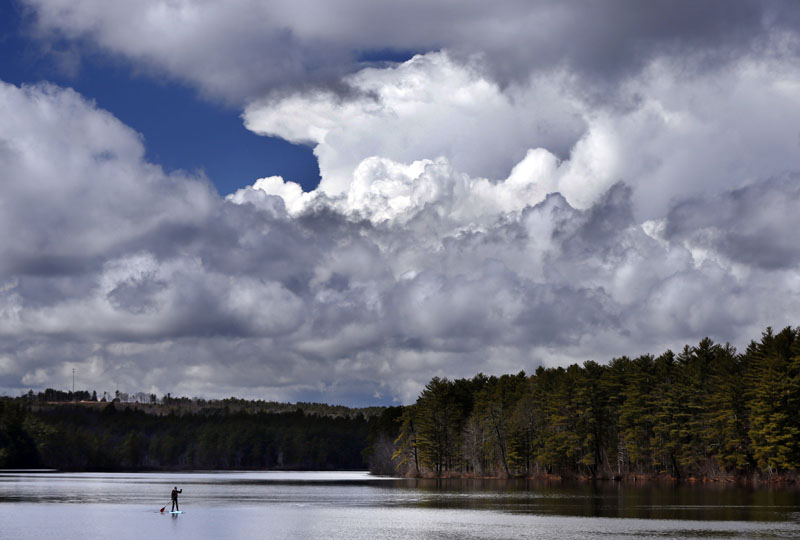 FILE - Storm clouds build prior to the arrival of a thunderstorm as Jeff Warren of Auburn, Maine, heads for shore on his paddleboard on Lower Range Pond, on Thursday, March 17, 2016, in Poland, Maine. Photo: AP
WASHINGTON: Most computer simulations of climate change are underestimating by at least one degree Fahrenheit how warm the world will get this century, a new study suggests. It all comes down to clouds and how much heat they are trapping. According to the study published Thursday in the journal Science, computer model simulations say there is more ice and less liquid water in clouds than a decade of satellite observations show. The more water and less ice in clouds, the more heat is trapped and less the light is reflected, said study co-author Trude Storelvmo, a Yale atmospheric scientist. She said even though it is below freezing, the clouds still have lots of liquid water because they don't have enough particles that help the water turn to ice crystals. As the climate changes, there will be more clouds with far more liquid, and global warming will be higher than previously thought, Storelvmo said. This is just the latest in a series of studies that have found that mainstream science may be too conservative in estimating the pace and effects of warming, including melting ice sheets in Antarctica. "None of this is good news," Storelvmo said. "You always hope that climate isn't as sensitive to carbon dioxide as we fear, same with the ice sheets, but we're calling it as we see it. Several studies have come out and show that we've been too conservative up until now." Uncertainties in mainstream climate science are more "on the bad side" than on the side of less harm, said climate and glacier scientist Richard Alley of Pennsylvania State University, who wasn't part of the study. "Climate science thus is probably more open to criticism of being too conservative than being too alarmist." How much warming is predicted for the next 80 or so years depends a lot on whether society cuts back on carbon dioxide emissions. In the worst-case scenario, with no carbon reduction, the United Nations Intergovernmental Panel on Climate Change sees temperatures rising by about 6.7 degrees Fahrenheit (3.7 degrees Celsius) by the end of the century, and Storelvmo said the liquid cloud factor would add another degree or more. While the study is "well-reasoned" and "sobering," there are uncertainties with the satellite observations that raise questions for Chris Bretherton at the University of Washington, who wasn't part of the study. If the Yale team is right and there's a bigger cloud feedback, he asked, why hasn't warming so far been even higher? That's a legitimate question, Storelvmo said, but computer simulations may also be underestimating the cooling effect of aerosols that mask the warming but are diminishing in the atmosphere.
#Climate change #More warming #Yale atmospheric scientist
You May Also like: