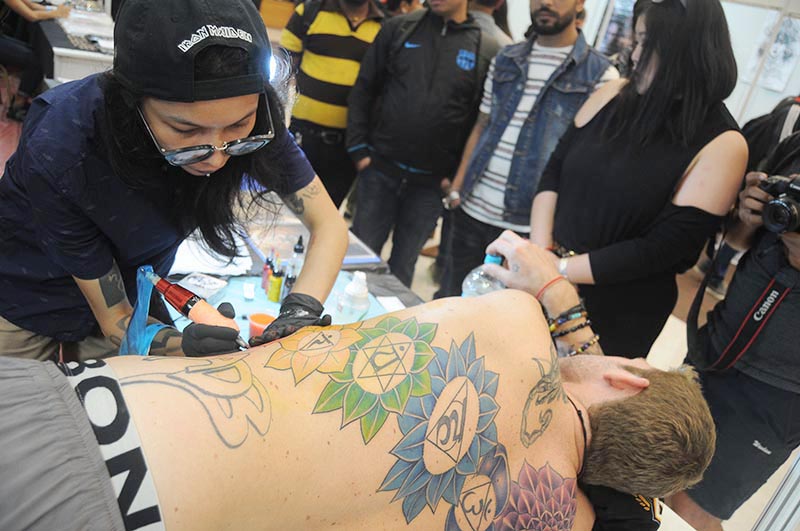 A man lies still while getting tattoo on his abdomen at the 8th International Napal Tattoo Convention, at Heritage Garden, in Sanepa, Lalitpur, on Friday, April 7, 2018. Photo: Balkrishna Thapa Chhetri/THT
Kathmandu Killing two birds with one stone is the apt term to describe the 8th International Nepal Tattoo Convention 2018. It is promoting art, but at the same time promoting Nepal as well. And the participating artists and visitors on April 6 — the first day of the three-day-tattoo fiesta — are its evidence. Entering the auditorium of Heritage Garden, Sanepa, one could hear the buzz of tattoo machines and people. That gave a feel of being in a huge tattoo studio, with many small studios within. But on a deeper speculation, it felt it was more than tattoos. Its first evidence was Brit Till, all the way from New York City, the USA. “He is a tattoo collector,” said artist Mohan Gurung, a legend in Nepali tattoo art and one of the directors of the Convention, introducing his customer-turned-friend. Till recalls meeting Gurung two-and-a-half years ago in New York (where Gurung is currently based)  — “I felt instant connection with him and got my first tattoo of Yak on my chest”. Along with getting inked, he got to hear about Gurung’s story of being a tattoo artist, the Convention and Nepal. “And since then I have been willing to come here,” shared Till, who is not here to get a tattoo done. Instead Till, who is here with his wife, wants to see different places of Nepal including Pokhara, and the Convention. He is yet to explore Nepal, but his first day at the Convention was a nice experience. “It was cool to see artists coming from all around the world, setting up booths, putting their hard work out.” Artist Melow Perez is here entirely for art, but again he has two plans — inking his clients and getting inked. Perez from Sacrifice BCN (Spain) is working on the first two days, he is inking the clients who have travelled to Nepal to get tattooed from him. Perez, who specialises in ornamental and geometric style, reveals, “I am doing an ornamental on face today, and tomorrow I have to do forearm of my client.” 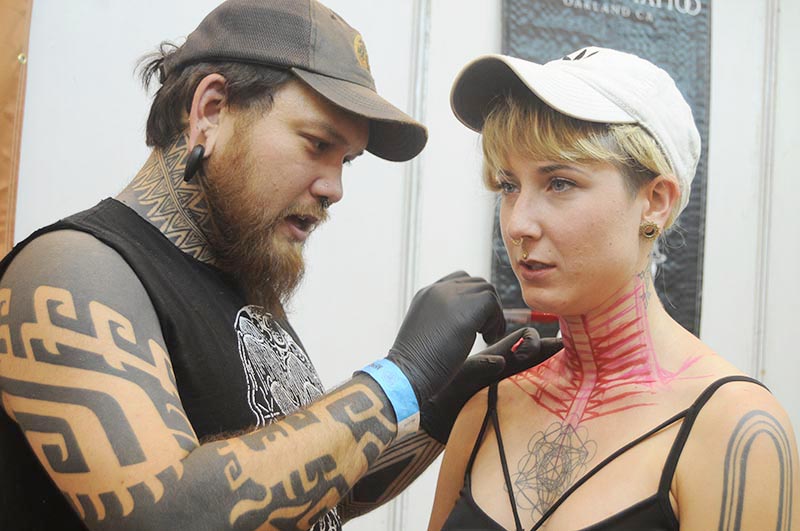 A foreign woman getting tattoo on her neck at the 8th International Napal Tattoo Convention, at Heritage Garden, in Sanepa, Lalitpur, on Friday, April 7, 2018. Photo: Balkrishna Thapa Chhetri/THT 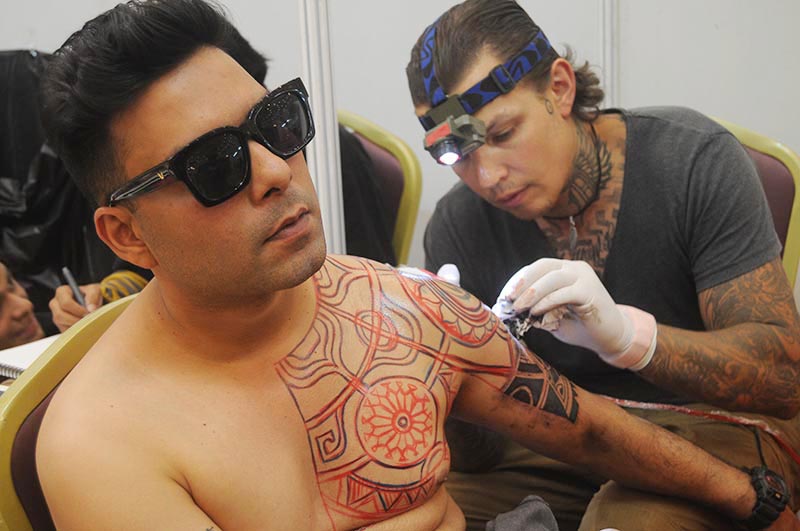 A man sits still while getting tattoo on his abdomen at the 8th International Napal Tattoo Convention, at Heritage Garden, in Sanepa, Lalitpur, on Friday, April 7, 2018. Photo: Balkrishna Thapa Chhetri/THT 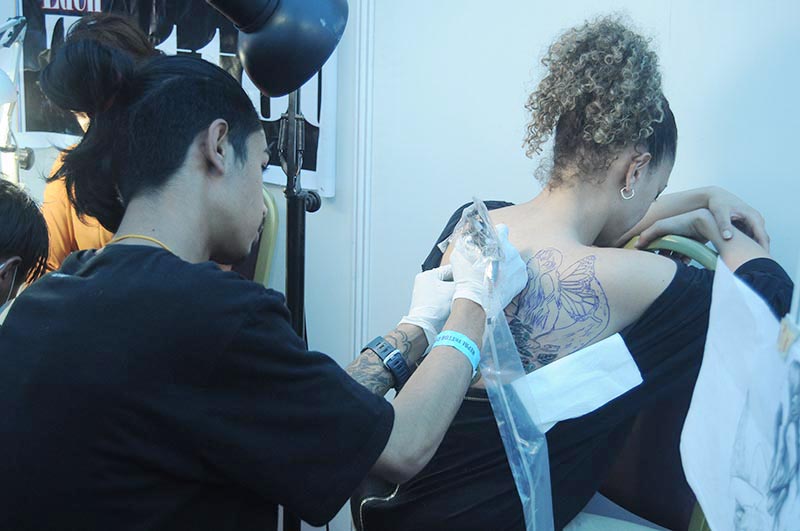 A woman sits still while getting tattoo on her back at the 8th International Nepal Tattoo Convention, at Heritage Garden, in Sanepa, Lalitpur, on Friday, April 7, 2018. Photo: Balkrishna Thapa Chhetri/THT 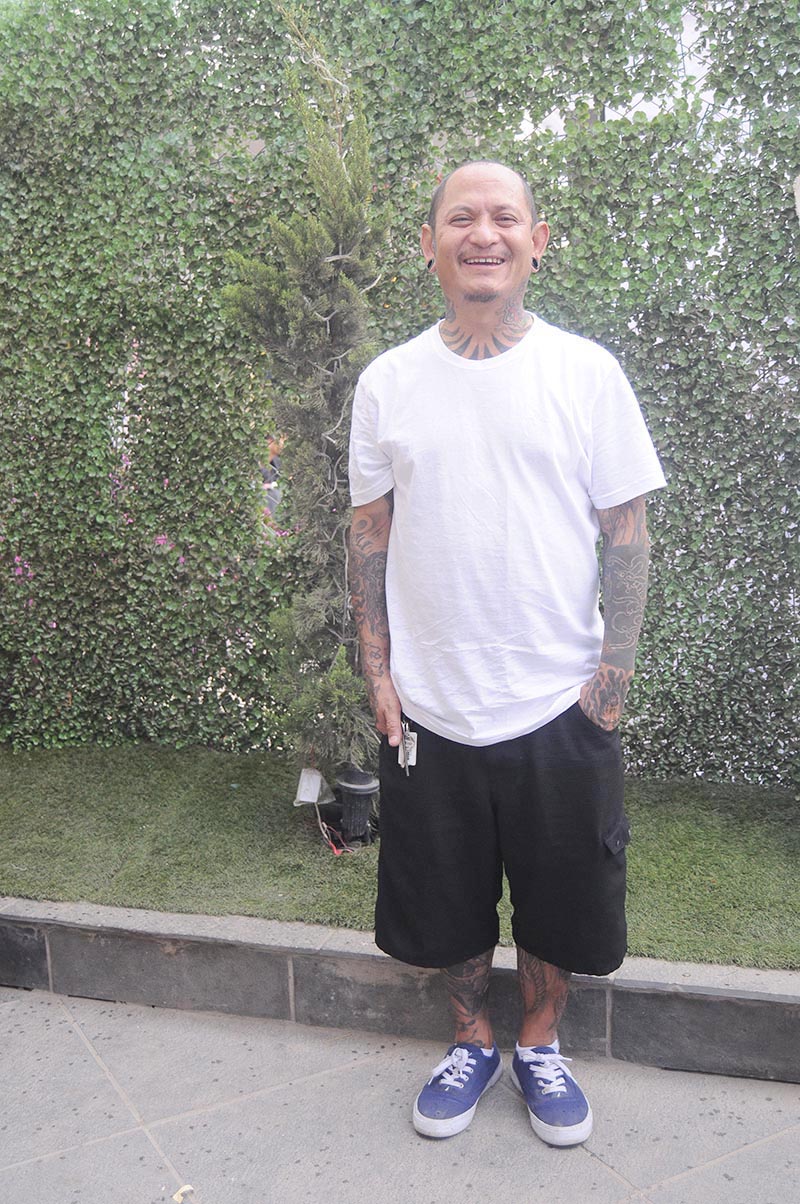 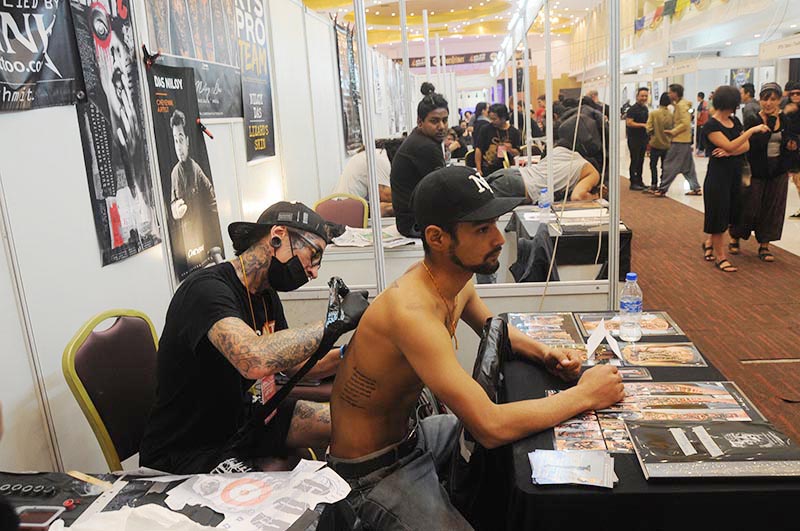 A man sits still while getting tattoo on his back at the 8th International Nepal Tattoo Convention, at Heritage Garden, in Sanepa, Lalitpur, on Friday, April 7, 2018. Photo: Balkrishna Thapa Chhetri/THT
On the last day of the Convention, he will be getting his fingers tattooed from Guy Lee Tattooer from France. A renowned tattoo artist in the ornamental work among others, it is not that easy to get an appointment with him. And Perez revealed, “I knew about him and had been following him. I like his powerful works. Finally I got an opportunity to meet Guy Lee on my second visit to this Convention and also an appointment to get the tattoo done.” But unlike Perez or his clients, Matthew Post  had not made any appointment with any artist. He just entered the venue, chose an artist at the booth of Up2UTattoo from Thailand and completed his previous work — seven chakras. Post, who works in the construction industry in Australia, initially inked chakras from Chhitiz of Mohan’s Tattoo Inn. He then trekked to the Everest Base Camp, and on April 6 he was lying relaxed at the Convention’s booth, where artist Toon was colouring his unfinished work. “Because Chhitiz was busy, I couldn’t complete it from him, so I am here,” said Post who “is interested in chakras and mediation”. Cally Jo, a famous artist in Australia too didn’t have any appointment — and it was intentional. “I didn’t want to get booked in advance as it means more pressure,” said Jo, one of the four participating artists from Little Tokyo Tattoo. She is looking forward to ink “small designs on local people”. She has chosen this “more relaxing” technique as Jo, who has very tight schedule throughout the year, wants her first Nepal visit to be more than participating in the Convention. “I love travelling and want to explore the country and go shopping with my friends,” she informed. While the aforementioned artists were sure of what they wanted, some were watching things, learning and trying to find out what they wanted. And Aroj Lamichhane, a Bachelor’s level student was trying to find out a suitable artist to rework his tattoo. Showing the fading G clef tattoo on his right forearm, he shared, “I have talked to an artist from Germany and she has agreed to work on it, but I am still not sure,” shared Lamichhane, who got the work done in Delhi, India. “I thought Nepali artists were not good, so I chose to go to India, but I have realised Nepali artists are far better”. He added that he first tried to get an appointment with a Nepali artist to “repair my tattoo” but since they were busy, he opted for other artists. “Let’s see what happens,” he stated. Looking around and learning things was tattooist Sumina Shrestha too. It was her first participation in the Convention, though Shrestha has been tattooing professionally for the past three years. “Currently I am observing and studying things,” she shared. She feels the need to prepare herself so that she can be a part of future Conventions. “And I am learning and very much inspired to see so many different kinds of work, style, technique of renowned Nepali and international artists from around the world,” she added. Not only foreign artists, but Nepali tattooists have also gone the extra mile to be a part of the Convention. While Gurung flew to the Capital from New York, another senior Nepali tattooist Gagan Thapa from Gagan’s Tattoo Inn had arrived here all the way from Pokhara. “Meeting artists and working together with them is the best thing about the Convention,” Thapa opined and he is doing some realistic and oriental designs on two foreigners and a Nepali customer this time. Thapa, who has witnessed the Convention since its inception in 2010 shared his observation, “It is developing over the years. It was difficult even to gather the artists then. Now we get many artists and it is a very good thing.” To this Gurung added that not only the number, but the work quality of artists, especially Nepali tattooists, has improved over the years. “Eight years ago their work was of low level, but now they have begun to ink the works of international standard,” he observed. Along with the improvement in work of Nepal artists, the international artists are making Nepal famous in the world, as per Gurung. “Those who come to this Convention go back home and spread positive message, making Nepal and its art famous in the international scene.” In about 110 booths, around 200 national and international tattoo artists are showcasing their inking skills — from traditional to black and grey, realism, dot works, Japanese, ornamental and so on in the Convention. And tuning with the rhythm of the buzz of their tattoo machines were traditional music and dance performances by Nepali performers on the first day. From Arati to Lakhey and Manjushree many different cultural dances were showcased on the stage set up at one end of the venue. The food stalls on its premises catered to the hungry ones. Interesting tattoo art, body modification and suspension as well as beautiful cultural performances await you on the two remaining days of the Convention. Organised by Nepal Tattoo Pvt Ltd, The Himalayan Times is the official media partner of the Convention.
#Art #Sanepa #tattoos #Heritage Garden #International Nepal Tattoo Convention 2018
You May Also like: