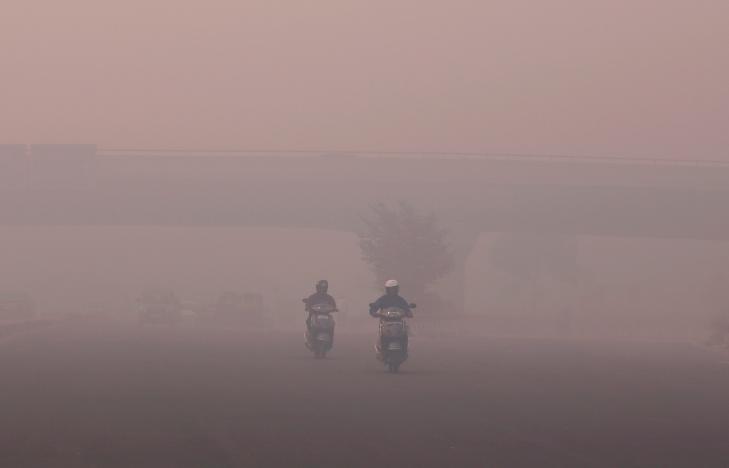 Commuters make their way amidst the heavy smog in New Delhi, October 31, 2016. Photo: REUTERS
NEW DELHI: Residents of New Delhi woke up to a blanket of smog on Monday as air quality deteriorated sharply overnight in India's capital, triggering warnings that even healthy people were at risk of respiratory problems. New Delhi ranks among the world's most polluted cities, with air quality usually worsening at this time of year, when smoke from firecrackers celebrating the Hindu festival of lights and crops burnt in nearby states envelops the city of 16 million. Drivers crawled through a thick fog as experts warned people to avoid outdoor exertion. "Last night, levels hit the severe category, which is the worst. You could see and sense how the visibility had come down and there was a choking haze all around," said Anumita Roychowdhury at the Centre for Science and Environment. Levels of PM 2.5, tiny particulate matter that reaches deep into the lungs, more than doubled within a few hours to 750 micrograms per cubic metre in the city's worst affected parts, India's Central Pollution Control Board said. That is 30 times a mean guideline of 25 micrograms per cubic metre on average over a 24-hour period set by the World Health Organisation (WHO), which says outdoor air pollution killed 3.7 million people worldwide in 2012. The US embassy in New Delhi said its air pollution index had late on Sunday breached the "hazardous" level upper limit of 500, at which it stops measuring levels of PM2.5. The index had rocketed to 1,126 by 2 am (2030 GMT) Roychowdhury said data was not available to assess if Delhi's air was worse on average than in prior years. Air quality is usually poorest in Delhi's winter months of December and January. Authorities have responded with measures such as a ban on old trucks from entering the city and briefly trialing a scheme that limited private vehicle usage to alternate days, but experts say they have done little to reduce pollution. India is home to four of the world's 10 cities with the worst air pollution, the WHO said in May. New Delhi ranked 11th. Almost one in seven children live in areas with high levels of outdoor air pollution, mostly in South Asia, UN children's agency UNICEF said. China shuts schools and offices if air quality deteriorates to extreme levels for three consecutive days, but India has not yet taken similar steps. "Where is the plan for short- and medium-term action, and for emergency action?" Roychowdhury said. "We need one very urgently."
#New Delhi #Hindu festival of lights #at risk of respiratory problems #world's most polluted cities #India's Central Pollution Control Board
You May Also like: