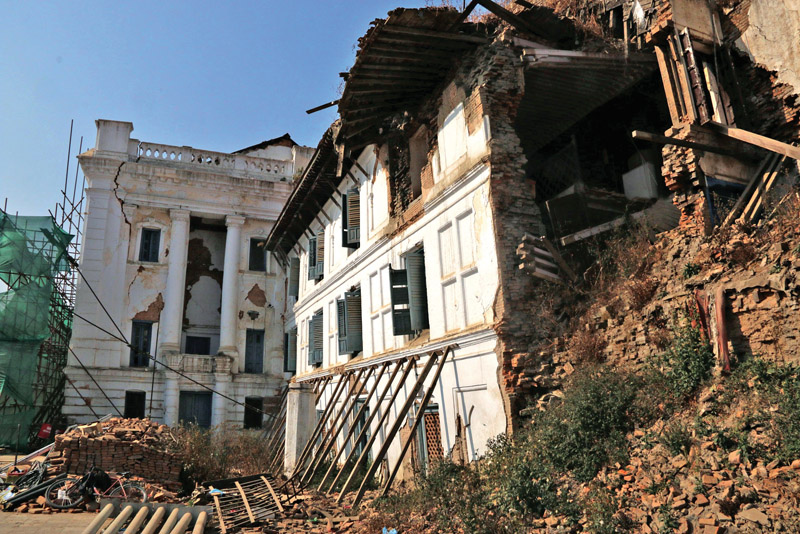 Kathmandu The Public Procurement Act says, “Thou shalt tender all projects” and therefore all projects are put to tender. The estimates are calculated by rule of the thumb; are they worthy of five or rather 10 million rupees? In the hallowed halls of the government funds are allocated in random selection. This is said to have strictly followed the Post Disaster Needs Assessment (PDNA), the omnipresent PDNA. The government rituals are performed ensuring that the rules are followed to the dot. The lowest bidder will get the work. The contractors throng the office of Department of Archaeology (DoA) as the tenders are collected, jostling around making deals to secure their pick. Considering that not even the policy let alone the conservation guidelines have been finalised, how were tender documents prepared? There is a proud announcement that 27 tenders for heritage structures have already been finalised. There are fortunately several reasons why this system will not work. The most obvious is the total disconnect between those preparing the tender documents and the reality on the site. Drawings are made of the possible original state of the historic buildings with little understanding of its traditional system or the state of damage. This means that tenders are based on a totally unsuitable technical language and rehabilitation process that completely neglects traditional practice and local community. There are no indications for the need for traditional artisans who would be the only ones able to reconstruct or restore historic monuments. The tender documents have been prepared without any understanding of conservation principle and procedures. The assumption is that the entire structure will be rebuilt using new materials with some sort of added strengthening such as concrete or steel tie beams. As soon as the guidelines are adopted these projects will have to undergo an entirely new cycle of assessments, in most cases probably nullifying the tender. The reuse of salvaged materials has also not been considered, especially since the identification of such elements is still on-going and in many cases has not even begun. There is constant reference to the on-going tendering being done based on PDNA that was prepared as per the report ‘in just over three weeks, a tight timeline, given the scale and magnitude of the disaster’. The PDNA was a wonderful means of obtaining pledges at International Conference on Nepal’s Reconstruction (ICNR) on June 25. The amount that was calculated under the section for cultural heritage was USD 215 million but could have been a 100 million more or less. Clearly this is too blunt tool to be used for implementation. The tenders indicate how much money needs to be spent on each monument and not how much is needed to ensure its correct reconstruction. There are many examples of tenders that have been floated for the reconstruction or restoration of monuments without the local community, priests and maintenance committees being aware of it. One such case is the Vishnu temple of ten avatars at Hanuman Dhoka next to the Kumari House which totally collapsed. The local community members have already raised their voices to stop the construction through tendering. Other examples include the tantric temples around Swayambhu where only the initiated priests are allowed to enter. The consolidation of the partially damaged Pratappur and the reconstruction of the mostly collapsed Anantapur by random contractors will be a contentious issue. UNESCO has shown concern that the tendering procedure would lead to detrimental work being carried out on the monuments. It was discussed with the DoA and the National Reconstruction Authority that a more appropriate system would be established. In the meantime all tenders must be stopped. (The author is an architect and can be contacted through paharnepal@hotmail.com)