US declares a Zika public health emergency in Puerto Rico 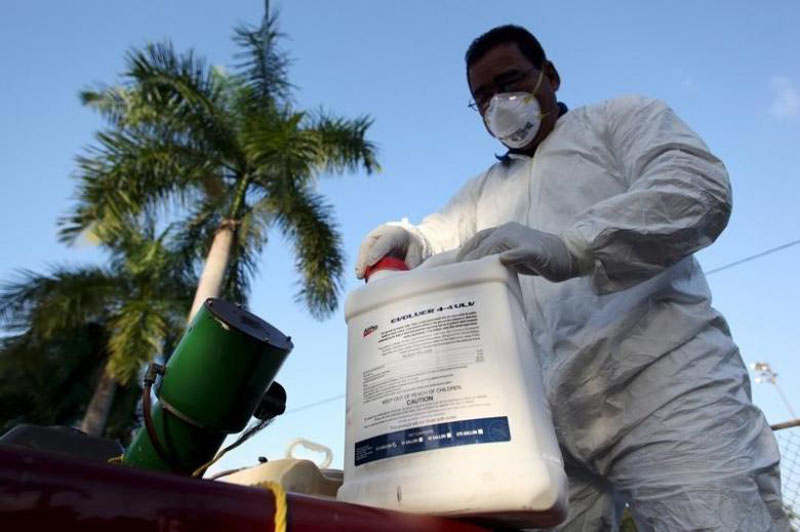 File - A health worker prepares insecticide before fumigating a neighborhood in San Juan, Puerto Rico, on January 27, 2016. Photo: Reuters
CHICAGO: The Obama administration on Friday declared a public health emergency in the US territory of Puerto Rico, saying the rapid and widespread transmission of the Zika virus threatens the health of infected pregnant women and their babies. The Caribbean island of about 3.5 million people has recorded 10,690 laboratory-confirmed cases of Zika, including 1,035 pregnant women, but the actual number of infections with the mosquito-borne virus is likely higher, the US Department of Health and Human Services said in a statement. Among US states and territories, Puerto Rico is expected to see the worst of the Zika outbreak due to its tropical climate and a lack of infrastructure for mosquito control. The only local transmission of the virus so far reported in the continental United States has been in South Florida. The virus can cause microcephaly, a birth defect marked by abnormally small head size and developmental problems in babies. It also can also be spread by sex, prompting public health officials to advise that people who have been infected refrain from unprotected sex for several months. "This administration is committed to meeting the Zika outbreak in Puerto Rico with the necessary urgency," HHS Secretary Sylvia Burwell said in a statement. The public health emergency declaration is a tool for the federal government to provide fresh support to Puerto Rico's government to tackle the outbreak and grants access to certain federal funds. The last time HHS declared such an emergency was in 2012 in the wake of Superstorm Sandy, which slammed into the New Jersey shore and flooded parts of New York City. It was the second important step to fight Zika that the federal government has taken in as many days. The administration said on Thursday it had shifted $81 million in funds from other projects to continue work on developing vaccines to fight Zika in the absence of any funding from US lawmakers.   REQUEST FROM THE GOVERNOR HHS made the declaration at the request of Puerto Rico Governor Alejandro García Padilla. It allows Puerto Rico to apply for funding to hire and train unemployed workers to assist in mosquito control efforts, as well as for outreach and education efforts. It also allows Puerto Rico to temporarily reassign public health workers to assist in the Zika response. "The declaration will allow access to more funds, the waiving of certain regulatory procedures to speed response, reassign key personnel, allow temporary personnel appointments, and provide the authority to take necessary actions to combat the outbreak," said Dr. Amesh Adalja, an infectious disease expert and senior associate at the UPMC Center for Health Security in Baltimore. Also on Friday, Florida said three more people had become infected with Zika by local mosquitoes, bringing the total to 28. Zika was first detected last year in Brazil, where it has taken its heaviest toll so far, and has spread rapidly through Latin America and the Caribbean. "The threat of Zika to future generations of Puerto Ricans is evident, and I feel a responsibility to do everything that is within my reach to make sure we fight the spread of the virus," Garcia Padilla said in a statement. The Obama administration in February requested $1.9 billion to fight Zika, but the Republican-led Congress has approved no money. A bill providing $1.1 billion was blocked by Democrats after Republicans attached language to stop abortion-provider Planned Parenthood from using that government funding for healthcare services, mainly in US territories like Puerto Rico. The Republican legislation also would siphon off unused money under Obama's signature 2010 healthcare law to combat Zika.
#Puerto Rico #Zika virus #Zika public health emergency #US Department of Health and Human Services #Pregnant women Zika risk
You May Also like: