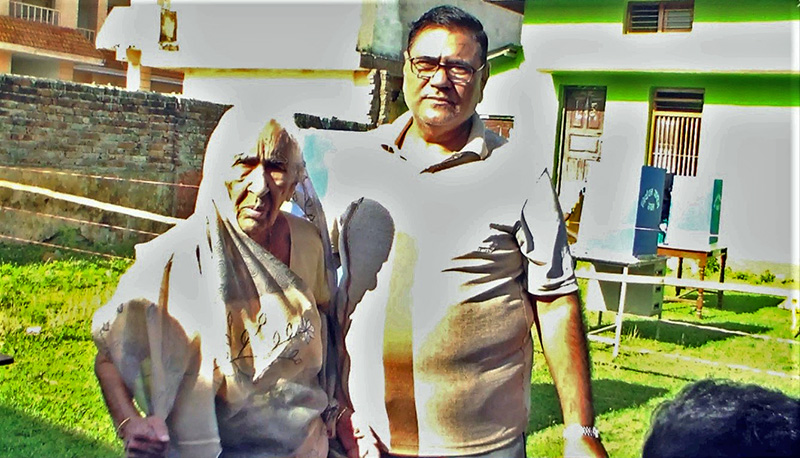 Samman Devi Joshi pose for a portrait after casting her vote in Rajbiraj, on Monday, September 18, 2017. Photo: Byas Shankar Upadhyay

RAJBIRAJ: Age is not the limit, as a 103-year-old woman has exercised her right to vote with enthusiasm during the third round of local level elections in province 2 in Rajbiraj on Monday.

Despite being physically weak, Samman Devi Joshi with the help of her son, went to the polling centre this morning to cast her vote. She also urged her grandchildren, sons and daughter-in laws to exercise their right to vote.

Election Officer Navaraj Khadka informed that the arrangement was made for elderly people to directly cast their votes as they do not have to queue in line.

Joshi said she was fortunate to elect their local representatives through local level elections after two decades.

"I may not be there to witness the next local level but i am fortunate enough to cast my vote this time around," She lamented.

Joshi who belongs to Marbadi community, urged the locally elected representatives to work to regain the lost charm of Rajbiraj.

"I wish all the best to candidates and express confidence that the winner would work accordingly to the people centric and people aspired development in the area.

She further said, road, drainage, drinking water, flood, security, health and other problems existing in the area would be addressed after the local polls.

#saptari district #Rajbiraj #local level elections
You May Also like: