At least 12 Nepali security guards were killed in an early morning terrorist attack in Kabul today.

Taliban have claimed responsibility for the suicide blast targeting a convoy having mostly Nepali security guards who were employed at the Canadian Embassy in the war-torn nation. 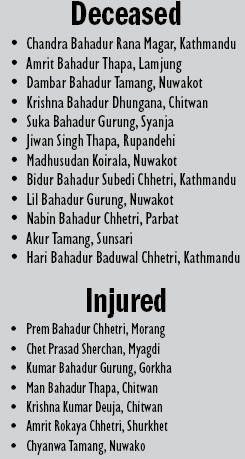 It is the deadliest assault against unarmed Nepali migrants since the cruel murder of a dozen Nepali hostages by an Islamic extremist outfit in Iraq in August 2004.

Ministry of Foreign Affairs confirmed the death of 12 Nepali nationals and made public their identities.

It also said seven Nepalis were injured in the attack that happened at 05:40am at Jalalabad Road in Kabul. The ministry has already informed the families of the deceased.

Earlier, Deputy Prime Minister and Foreign Minister Kamal Thapa informed the Parliament that at least 14 Nepalis were learnt to have been killed and five injured.

A source privy to the matter told this daily that the other two deceased were Indian citizens of Nepali origin.

“We could confirm that only 12 out of 14 people who were killed in the attack were Nepali citizens,” MoFA spokesperson Bharat Raj Paudyal, who earlier served as Nepal’s Ambassador to Afghanistan, said.

Most of the Nepali victims had served in the Nepali security forces before going to Afghanistan, according to a MoFA official.

Canadian Prime Minister Justin Trudeau tweeted that the attack against the security workers was ‘appalling & cowardly”.

Afghanistan’s Chief Executive Abdullah Abdullah said it was an “act of terror and intimidation”.

Nepal partially allows its citizens to work in Afghanistan only in the so-called green zone areas, such as foreign diplomatic missions, the United Nations and its agencies and some multi-national organisations.

MoFA was yet to ascertain if the victims had reached Afghanistan through official or unofficial channels.

Since the deceased were hired by the British firm Sabre International, Canadian mission will have a very limited liability in this incident.

“We couldn’t be sure that the terrorist attack was targeted exclusively against Nepali migrant workers,” Paudyal said.

He estimated that some 1,500 Nepalis were still working in Afghanistan, mostly as security guards. Most of them reached the South Asian country bypassing the official channel and using alternative routes like Dubai or New Delhi.

According to an estimate, over 10,000 Nepali people used to work in the war-torn country till 2014. After the NATO forces pulled out, the number of Nepali migrant workers had reduced significantly in Afghanistan.

Later today, DPM and Foreign Minister Thapa also called his Afghan counterpart Salahuddin Rabbani and sought security of remaining Nepalis in Afghanistan and urged him to provide proper treatment of those injured.

The Afghan minister assured DPM Thapa of full cooperation for treatment of the injured and repatriation of mortal remains of Nepali nationals killed.

Meanwhile, Tirtha Raj Wagle, Charge d’Affairs of the Embassy of Nepal in Pakistan, which concurrently looks after Afghanistan as well will reach Kabul tomorrow morning to take stock of the incident, talk to the local authorities and perform tasks of repatriation of mortal remains of the deceased.