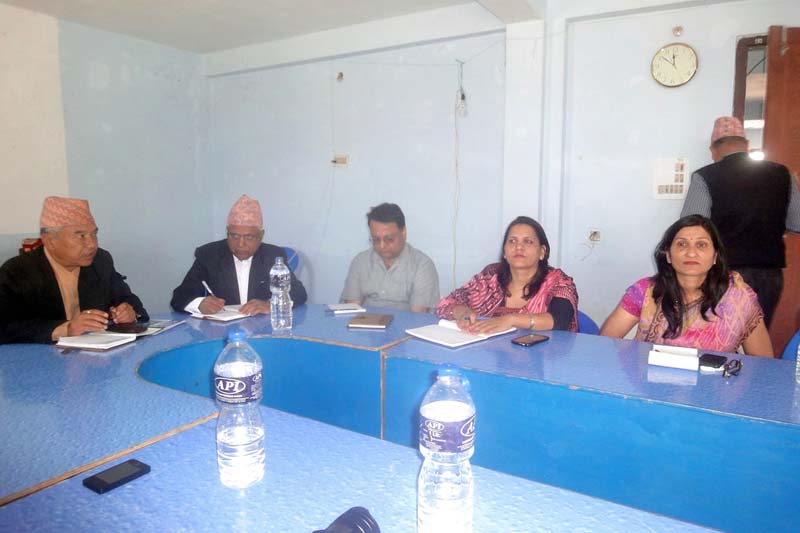 Chairperson and members of the Truth and Reconciliation Commission (TRC) interact with the conflict victims from various districts of the Far-western Development Region of Nepal in an undated photo. Courtesy: TRC
Kathmandu, October 14 The Truth and Reconciliation Commission has prepared reparation guideline suggesting various compensation and reparation schemes for victims of the Maoist insurgency. The guideline, which is currently under review among TRC office bearers, has proposed 18 reparation schemes for families and dependents in murder cases. Schemes for murder cases include financial support to the victims’ families for free education, vocational training, and soft-loans and residential and other facilities such as psychological counselling. Likewise, public apology from head of state/government or responsible persons from the conflicting parties, declaration of Martyrs’ Day in the name of the victims, naming local infrastructure after the victims etc have also been proposed so that it would help heal the wounds of crime victims. The guideline will be finalised once the TRC endorses it. TRC has sub-classified murder incidents into 16 categories in terms of the nature, circumstances, contexts and methods of the killing. “We have yet to decide whether to suggest providing all reparation packages or only some of the proposed schemes in each conflict-era murder case,” said TRC member Madhabi Bhatta, who had coordinated a seven-member guideline drafting panel. The draft was submitted for detailed review at the TRC last week. Different reparation packages have been suggested in six other types of war-era crimes comprising abduction, maiming, torture, rape and sexual violence, seizure of property and forcible eviction and displacement. These packages include financial support for soft-loan, free health service, free education, employment opportunity and public apology from senior responsible persons in the conflict. “These reparations are not proposed as an option to due legal proceedings and action against alleged perpetrators of the crimes,” Bhatta told The Himalayan Times. “It is rather an effort to provide some support and facilities to the victims or their dependents,” she said. The proposed guideline, however, has not mentioned the ceiling on financial packages or duration of free education, limit of soft-loan or other technical details of the proposed reparation packages. A TRC official stated that such aspects would be incorporated after a review of the draft by TRC members and other concerned parties, including representatives of conflict victims. Meanwhile, stating the limitation of time for preparing the guideline, the panel has sought three months to map out details of all proposed reparation schemes, with due inputs from the victims’ side.
#Truth and Reconciliation Commission #Maoist insurgency #war-era crimes
You May Also like: