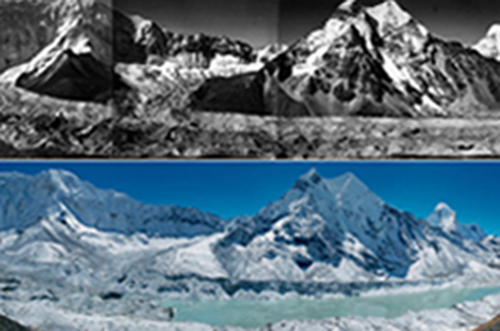 File - Imja glacial lake in Solukhumbu district. Photo: THT
Kathmandu, October 6 The government has successfully drained 2.5 metres of water from Imja Lake, one of the fastest growing glacial lakes in the Himalayas. Nepal had begun draining water from the glacial lake around two weeks ago on September 24 to save over a dozen villages from the risk of glacial lake outburst flood. A team from the Department of Hydrology and Meteorology started work from 9:00 am of September 24 by releasing water through the lake’s main gate. Department of Hydrology and Meteorology informed that water level has decreased by 2.5 metres and water will be released until up to 3.5 metres is drained. “We succeeded in mitigating the risk of glacial lake outburst flood by lowering the water level by 2.5 metres,” Rishi Ram Sharma, director general at the Department of Hydrology and Meteorology told The Himalayan Times. Before starting the draining process, the department had alerted residents of villages located downstream from the lake about the dangers of rising water level in Imja Lake and the Dudhkoshi River. After maintaining normal flow, no incident has been recorded. Sharma said the technical team is releasing water at the rate of three cubic metres per second, and the team plans to drain a total of 4 million cubic metres of water from the lake. The project was initiated by the Department of Hydrology and Meteorology under the 7.2 million dollar budgeted Community Based Flood and Glacial Lake Outburst Risk Reduction Project. The project aims to reduce possible loss of human lives, property, and infrastructure from GLOFs in Solukhumbu and the downstream areas of Mahottari, Siraha, Saptari, and Udaypur. The Nepali Army constructed the outlet gate to release water accumulated since June 1 this year. NA personnel had constructed a three-metre wide and 1.5-metre deep outlet channel to drain the water. As many as 40 personnel and 62 civilians were involved in the task. The Nepali Army had completed the construction work in and around the lake a month ago. After draining 2.5 meters, the glacial lake is 180 metres deep, two kilometres long, 650 metres wide, and is spread over 130 hectare. The surface area of the lake is said to have expanded from 0.4 to 1.01 square kilometres between 1984 and 2009 due to rapid meltingsnow. An estimated 96,562 people are living in vulnerable areas downstream of Imja Lake. Nepal is ranked the fourth most vulnerable country in the world to the impacts of climate change. A total of 3,808 glaciers and 1,466 glacial lakes have been identified in Nepal. These include 21 potentially dangerous lakes, out of which six are at very high risk. Thso Rolpa and Imja Lakes are among them.
#Department of Hydrology and Meteorology #glacial lakes #Imja Lake
You May Also like: