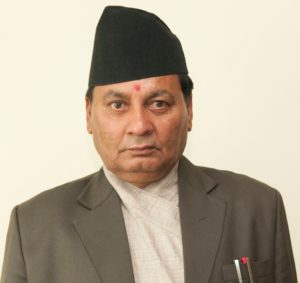 This image shows Commissioner of the Commission for the Investigation of Abuse of Authority Raj Narayan Pathak.

The Commission for the Investigation of Abuse of Authority today started recording statement of Gyanendra Jha, who has accused former CIAA commissioner Raj Narayan Pathak’s brother Shubha Narayan of using him as a mule to hand over bribe money to his brother Raj Narayan.

Jha said he responded to some introductory questions asked by the CIAA officials today and told them that he would appear before the anti-graft body on Sunday again.

“CIAA officials asked me some introductory questions today. They wanted to ask about the case but since I had some urgent things to do, I told them that I would come again and they told me that I can come again on Sunday,” Jha said.

Jha had earlier told THT that former CIAA commissioner Raj Narayan also coerced him to collect bribe money of Rs 7.8 million in two instalments from Lambodar Neupane, one of the board members of Bhaktapur-based Nepal Engineering College.

Karate player Dhwajman Muktan had carried out sting operation against Raj Narayan after Jha sought his help for the same. In the sting operation, Pathak had admitted that he made a blunder by receiving bribe from Neupane.

Pathak stepped down from the CIAA after parts of the hours-long videos taken by Muktan were made public.

The bribe was handed over by Jha to settle a corruption case lodged at the CIAA against a number of board members of Changunarayan-based Nepal Engineering College, who had made “illegal” attempts to transform the public educational institution into private.

#Commission for the Investigation of Abuse of Authority #Raj Narayan Pathak
You May Also like: