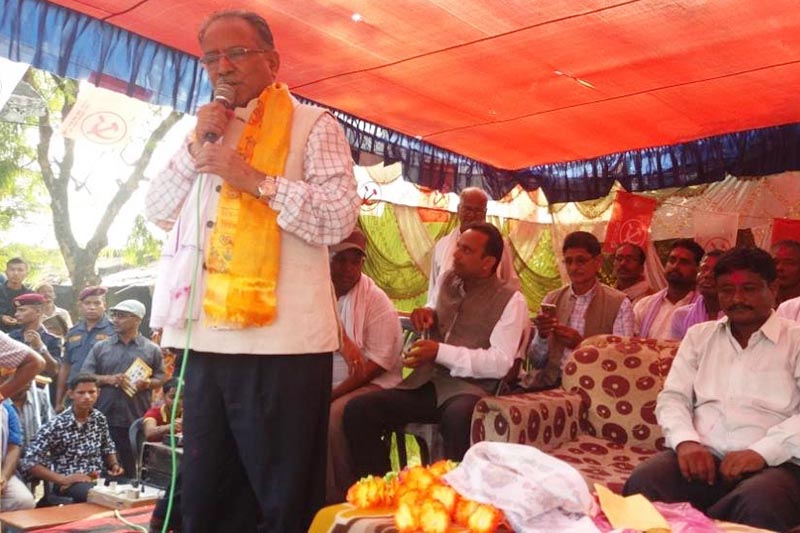 CPN-Maoist Centre Chairperson Pushpa Kamal Dahal addressing an election rally in Mirchaiya Municipality, Siraha, on Wednesday, September 13, 2017. Photo: THT
RUKUM: Chairman of CPN-Maoist Centre Pushpa Kamal Dahal has admitted that his party which was first after the first Constituent Assembly elections, faced severe dent becoming the third owing its arrogance. Addressing a gathering at Sisne rural municipality of eastern Rukum here Saturday, Chairman Dahal said, "We're together with people during people's war, but failed to reach people after peace process. It was reflected in the recent local elections, however, our agenda got victory." Chairman Dahal further tried to assure that the people's government run by the party has not got constitutional recognition as local government. "Don't be confused, the present local governments are the people's governments of the war-time. So, you act accordingly." He argued that time has evolved in the way, the NC and UML can not abrogate federalism though they secure more votes. According to him, people have been despair as the Maoist party split time and again. So, all splinter Maoist need to be united to meet people's aspiration, the Chairman underscored. The Chairman said his party would emerge first in the forthcoming elections of provincial and of federal parliaments. "Although a leader said some days back that Rukum was yet to realize loktantra, I proudly say, Rukum has fully realized the loktantra," he said, encouraging the people, "Rukum people have inspired entire Nepali people for change. Now, you're running the local government. Don't show arrogance." The people from the eastern Rukum were assured of utmost help from the party for the socio-economic and political development.
#Constituent Assembly #Pushpa Kamal Dahal #CPN Maoist Centre #local level elections
You May Also like: