Nepalgunj, January 22 Lack of adequate police personnel in proportion to the district population has posed security challenge in Banke. As per the 2011 census, Banke has a population of 491,313. The number must have gone up significantly in the past eight years. However, the district has quota for just 940 police personnel. There is a provision that 10 per cent personnel out of the total quota can stay on leave. Police officials say that around 800 personnel attend duty regularly. 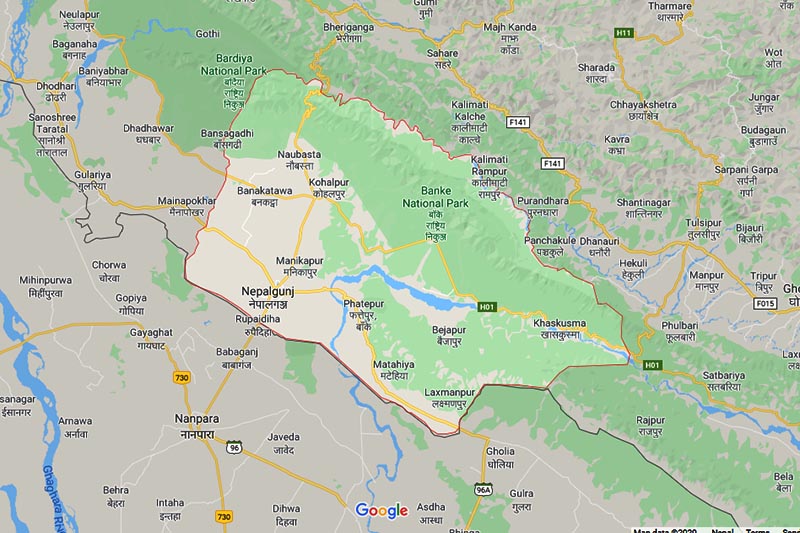 This image shows the maps of Banke district, in Province 5 of Mid-western Nepal. Image: Google Maps
According to 2011 census, one policeman has to provide security to 522 people in the district. Police officers say quota of police personnel is not sufficient. A policeman has to be on duty for up to 17 hours a day due to lack of adequate human resource. Besides the District Police Office, Banke has 13 area police offices, two border posts and 17 police posts, according to Banke SP Bir Bahadur Oli. Police personnel have to manage security of District Administration Office, Customs Office, Prison Office and Child Reform Centre. Around 20 personnel have to be deployed to take detainees to and from the district attorney’s office, District Court and DAO, on a daily basis. Nepalgunj lies at the centre of three provinces. “Police have to provide security and escort VIPs repeatedly,” said SP Oli. Police personnel are also mobilised during special events such as exhibition, fair, festival and other programmes. “Security in normal situation can be maintained. But, it is hard to maintain law and order in difficult situation such as during election and festivals,” said police officials. The district shares its border with India running up to 65 kilometres. APF has five posts for  border security. But, police personnel have to remain alert keeping in view possible criminal incidents due to the open border. Police have to be deployed to tackle drug addiction problem also in Nepalgunj, said Oli. Crime rate is escalating every year in Banke. But, the number of police personnel has not increased.
#Banke #Security challenge #Lack of adequate police personnel #security challenge in Banke
You May Also like: