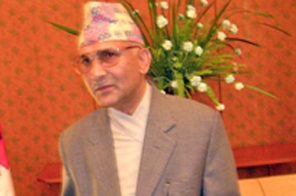 KATHMANDU: Chandra Prakash Khanal 'Baldev', deputy commander of the People's Liberation Army (PLA) of the UCPN-Maoist, today claimed that Defence Minister Bidhya Bhandari had been speaking as dictated by CPN-UML's senior leader K P Oli.
"The version of (Minister) Bidhya Bhandari does not correspond with the ethos of the peace process, Interim Constitution and the country's federal structure," he claimed while addressing an interaction organised by Jana Sanchar Abhiyan here in the capital today.
The PLA commander also claimed that the minister's version was remote-controlled by the UML leader Oli.
He claimed that if everyone continued talking against the spirit of consensus, then the Maoists would demand amendment in the constitution in order to strengthen the PLA, against minister Bhandari's proposal to strengthen the Nepali Army.
Nothing would happen in the country without consensus among political parties, he claimed.
"Even the constitution made without consensus will just be a piece of paper which anyone will tear off and throw," he commented.
In another context, the PLA leader said that they had not termed any of their combatants "unfit" and had not signed any documents claiming they were unfit. "Yet, we're ready to discharge them for the sake of the peace process," he claimed. He further said the unfit combatants could be appointed in any of the security bodies.
He demanded that the unfit combatants should be ensured a permanent job before they were discharge from the cantonment.
"If they are not satisfied by the government's offer, they might against take up the arms and create havoc," he warned.
At the same function, convener of Nepal Joint Ex-Army Association -Revolutionary (NJEA-R) Purna Bahadur Rana, said that the rebels had no any bar or measurement. "Even an old man or a young lad can take part in the rebellion," he said, adding that army integration and the drafting of constitution should be taken forward simultaneously.

#Bhandari dances to Olis trumpet
You May Also like: