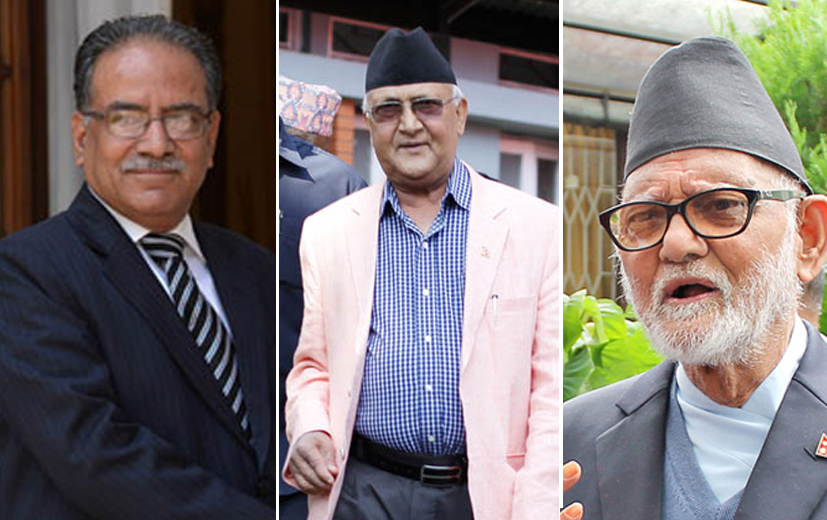 UCPN-Maoist Chairman Pushpa Kamal Dahal (left), CPN-UML Chairman KP Sharma Oli (centre) and Nepali Congress Chairman Sushil Koirala. Photos: RSS
Kathmandu, September 28 Three major political parties — Nepali Congress, CPN-UML and Unified CPN-Maoist — today began negotiations with agitating Madhes-based political parties by forming a three-member talks team. After a three-party meeting held this morning at Prime Minister Sushil Koirala’s residence in Baluwatar formed the team comprising Unified CPN-Maoist leader Narayan Kaji Shrestha, Nepali Congress leader Mahesh Acharya and CPN-UML leader Agni Prasad Kharel, the talks team today held initial talks with some Madhesi leaders. During the talks held separately with Tarai Madhes Democratic Party leaders Mahantha Thakur, Hridayesh Tripathi and Sarvendra Nath Shukla at Thakur’s house in Bhaktapur and Madhesi Janaadhikar Forum-Democratic Chairman Bijaya Kumar Gachhadar at the latter’s house in Sanepa, each side urged the other to create conducive environment for talks before entering into the political agendas, according to Narayan Kaji Shrestha. “We expressed our readiness to incorporate two major issues – proportional inclusion and making population the major basis of delimitation of electoral constituencies – in the new constitution through amendment. We also said the issue of boundaries of federal units could be settled through Constituency Delimitation Commission,” said Shrestha. However, today’s talks were more focused on how both sides could create conclusive environment for talks, according to Shrestha. TMDP leader Hridayesh Tripathi said the ongoing movement could not be stopped until the issue of boundaries is addressed precisely. “We cannot accept addressing the issue of boundaries through commission later. Like the three parties decided the seven-province model with clarity, our concerns about the boundaries should be addressed precisely,” Tripathi said. The movement will not be stopped or scaled down until this concern is addressed because 42 people have already sacrificed their lives and over 600 have been injured during the 50-day movement, he said. The three-party talks team had urged the Madhes-based leaders to stop blockade at the customs points on Nepal-India border and stop violent protest for creating environment of trust, according to UML leader Kharel. The Madhesi leaders demanded that the government’s excesses against the protesters should be stopped and the lawsuits against them withdrawn, Kharel said. “Today’s talks ended in a positive note. We will continue talks tomorrow,” he said. As the United Democratic Madhesi Front led by Upendra Yadav has deputed TMDP Chairman Thakur to represent it in the talks, the talks will continue with him and his team, while the three-party talks team will also hold talks with Yadav, Sadbhawana Party leader Rajendra Mahato and others, if necessary, according to Shrestha. Meanwhile, Gachhadar said, “I told the government’s talks team to ensure the release of arrested protesters, withdraw lawsuits against protesters, resend the Nepali Army to barracks, withdraw the decision on prohibited areas, provide compensation to the victims and their families and ensure free treatment to the injured agitators for creating environment of trust for talks.” He said he suggested the three parties’ talks team to come up with clear-cut view on three major agendas, including the boundaries of federal units.
#CPN-UML #Nepali Congress #Unified CPN-Maoist #Madhesi parties #Madhes-based political parties
You May Also like: