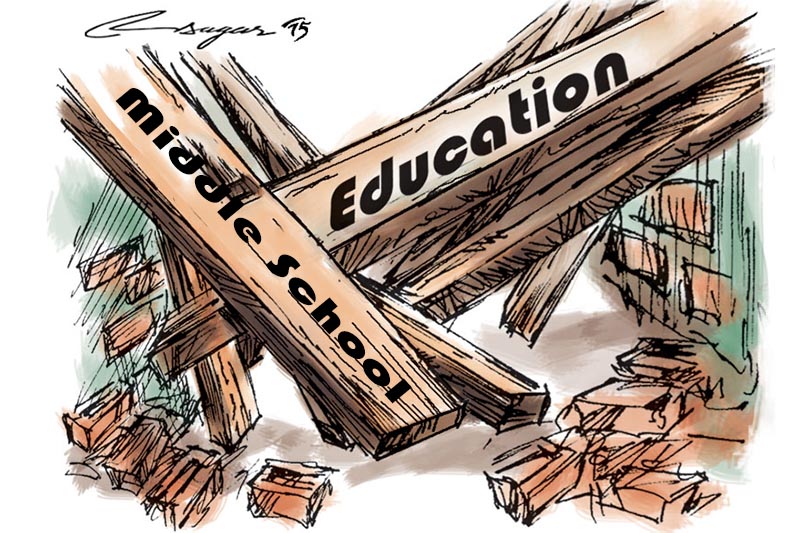 Illustration: Ratna Sagar Shrestha/THT Online
Kathmandu, April 11 The Nepal Law Commission is drafting a new Education Bill that proposes to make middle school education mandatory for seeking government jobs, contesting elections, obtaining permission for businesses, opening any firm or company or non-governmental organisation or assuming the duty of board of director of any institution. An NLC official said his office, which had been preparing the draft of the new Education Bill at the request of the Ministry of Education, had proposed to bar people who had not passed Grade VIII from doing certain things with effect from mid-April 2027. The NLC official said the bill had provisioned compulsory and free education up to Grade XII and those wishing to study in religious institutions, such as Madrassas, Gurukul and Guma, could do so provided they would teach curricula endorsed by the government, the official said, adding that the local governments would have the responsibility of ensuring free and compulsory education. He, however, added that all children would have the opportunity to attain free and compulsory education up to the secondary level in community schools, but not in private schools. “It will be the local levels’ duty to ensure that needy children get free and compulsory education,” he added. He said the bill proposed that the government could   start education in English language from Grade VI. Educationist Mana Prasad Wagley said unless private education system was abolished, realising the goal of socialism as envisioned by the constitution would be difficult. “Private institutions should provide education for higher studies,” he said, adding that private institutions providing secondary education had created inequality among the children. Another educationist Bidhya Nath Koirala said the new bill put the onus of ensuring free and compulsory secondary education on local governments, but did not clarify how the local governments would manage fund for the same. “In New Zealand, the fund for free and compulsory education lies with local governments. In the US, it is the states’ responsibility, while in India the fund is provided proportionately by the provincial and federal governments,” he said. He added that the bill should clearly state which model it wanted to follow to ensure free and compulsory education. Koirala said since political leaders had invested in private schools, shutting them down was not possible. As long as there are private education institutions, the government cannot force parents to send their children to community schools, he argued. Koirala said the new bill should clearly state what to do with private education institutions. “The government should clearly state the level from which private institutions can provide education. It must also state whether they can provide general or technical education,” Koirala said. “The government can fund private institutions and tell them to cater to certain groups of students,” he said and added that the rate of students dropping out of schools between Grades I and X was 67 per cent. He said parents’ dependence on private institutions in major cities was very high. “In Kathmandu 72 per cent children go to private institutions. This percentage is 59 in Nepalgunj,” he added.
#Nepal Law Commission #Education Bill #Grade VIII education #NLC #middle school education
You May Also like: