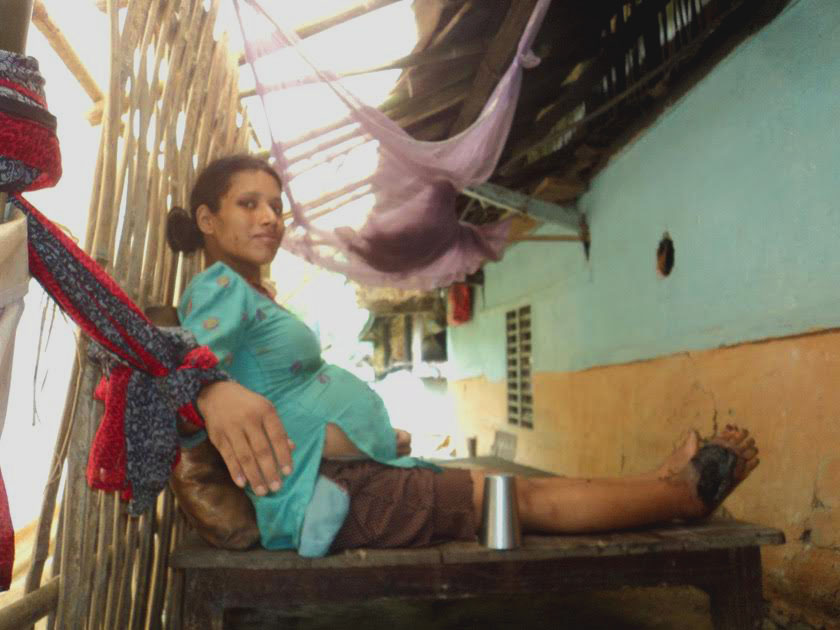 A mentally disturbed pregnant woman, who had been tied up with a rope near her home in Triyuga Municipality, Udayapur. She was rescued on Wednesday.
Gaighat, August 10 A 22-year-old mentally disturbed pregnant woman, who had been tied with a rope for six months at a bamboo grove near her home was rescued by local women rights activists and police personnel from Triyuga Municipality, Udayapur, today. Sirjana Karki (Khadka) was rescued and admitted to District Hospital Udayapur for treatment. Sirjana was chained at a bamboo grove near her home by family members for six months. She is five months pregnant. SP Nar Bahadur KC of District Police Office said that women rights activists and police personnel had rescued the Sirjana immediately after the incident was reported to them. Women rights activists have set up a fund for her treatment. “The fund collected Rs 20,000 today alone,” Bala Khatiwada said, adding, “After the necessary fund is collected, Sirjana will be sent to the Capital for treatment”. According to Bhola Chaudhary, who is attending on Sirjana, her hands, legs and whole body have received several bruises. With her parental home Ladabhir, Sindhuli, Sirjana was married to Manoj Khadka three years ago. Her father-in-law Bhim Bahadur said that Sirjana was admitted to Patan Hospital, Lalitpur after she suffered from mental disturbance some time after her marriage. “She could not be kept at the hospital for treatment as suggested by doctors due to fund crunch,” said Bhim Bahadur. After Sirjana conceived, her husband Manoj too disappeared from the village two months ago. “I do not know where my son is. The condition of the daughter-in-law is miserable,” said Bhim Bahadur, adding, “She was chained out of obligation to prevent her from fleeing home.”
#pregnant #Udayapur #Women rights activists #Patan Hospital
You May Also like: