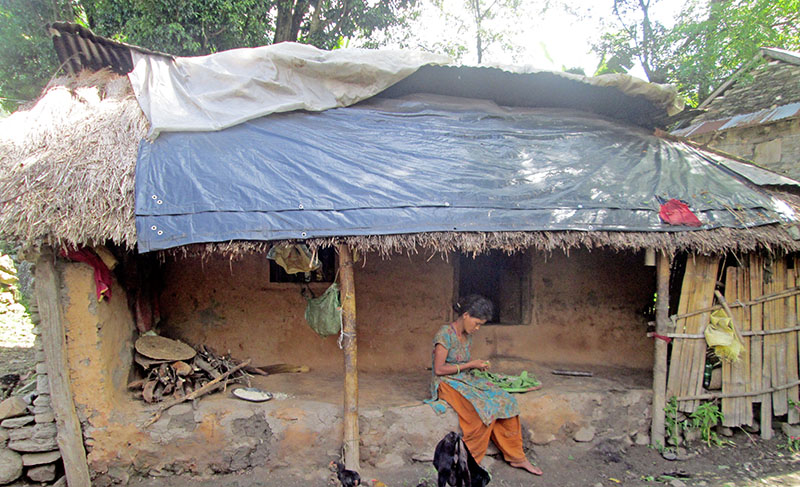 A member of Chepang Community performing household activities in Barkot of Lamjung district, on Sunday, September 3, 2017. Photo: Ramji Rana
LAMJUNG: As many as 12 households of Chepang Community have been compelled to live in dark under the electricity lights for more than two decades in Barkot of Besishahar-11 in Lamjung district. Chepangs have claimed that they were deprived of electricity lines, as they were poor, marganilised, minorities and can't afford to pay bills, in the village. However, nearby villages were electrified some 2 decades ago. One of the members Aamrita Chepang shared a nearby electricity light of Middle Marsyangdi Hydropower Station reflects on our porch. "We have been compelled to live in dark under the electricity light," Aamrita lamented. "No body heard our plea, we knocked the doors of Electricity Consumers Forum and Nepal Electricity Authority doors but to no avail, who would address and listen our plight," She questioned. Without electricity, the whole village have been abstained from radio and TV communications from outside world. Similarly, Sita Chepang said despite being close to the district headquarters Besishahar, we have been deprived of electricity and living in dark under the lights. "Our children studies have been badly affected without electricity and we are facing tough time preparing food for our families," Sita added. Meanwhile, repeated plea to the Lamung Electricity Consumers Forum chairperson Shreekanta Ghimire has assured to provide electricity to 12 Chepang households, 9 houses in Virkuna and remaining others in Barkot in the district. It has been learned that the Electricity Consumer Forum formed in 1995 had distributed at least 28,000 electricity lines in Lamjung and Tanahun district. Middle Marsyangdi Hydropower Station had started generating electricity from 2008. However, a nearby Chepang village has been isolated in dark.
#Nepal Electricity Authority #Lamjung district #Chepang community #Middle Marsyangdi Hydropower Station
You May Also like: