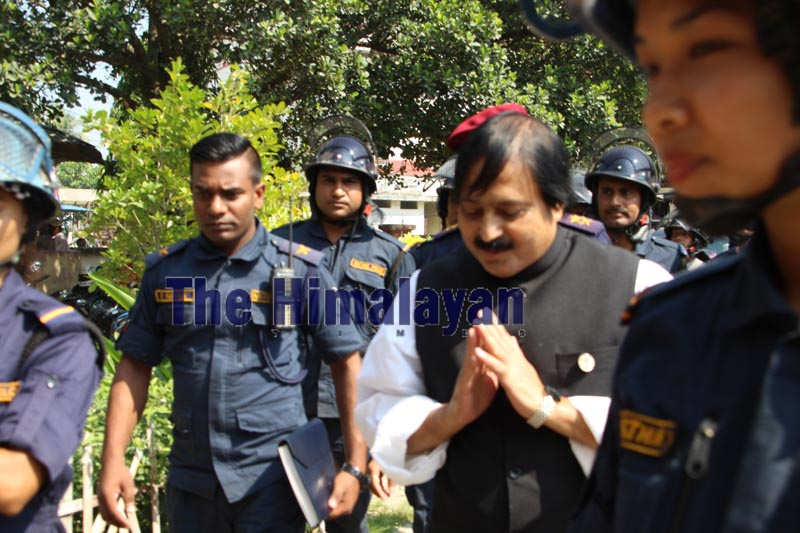 Nepali Congress lawmaker and Member of Federal Parliament, Mohammad Aftab Alam, being taken to Rautahat District Court in Gaur for hearing, on Tuesday, October 15, 2019. Photo: Prabhat Kumar Jha/THT
RAUTAHAT: The District Court, Rautahat will resume recording the statement of Nepali Congress (NC) leader and suspended lawmaker Mohammad Aftab Alam again on Wednesday. Controversial NC leader Aftab Alam has been sent to police custody as the court is yet to finish recording his statement. "The recording of statement started around 1:30 pm, however, it was halted for a while after defendant's lawyers demanded an original copy of the charge-sheet," said Khadindra Raj Katwal, government attorney. Court finally began recording Alam's statement at 3:15 pm even though he was taken to the court around 10:30 am today. While recording the statement, Justice Deepak Dhakal asked him nine questions, government attorney Katwal, informed. The Rautahat District Attorney's Office on Monday had filed a charge sheet against Alam, in connection with the explosion and subsequent murder of at least 23 people in Rautahat some 12 years ago, demanding life imprisonment against him. Alam has also been charged with attempted murder and causing explosion. NC leader Alam, who was arrested on October 13, is accused of burning alive the victims injured in the bomb explosion that occurred on April 09, 2008, on the eve of first Constituent Assembly elections. Earlier, Alam was elected to the federal parliament from Rautahat-2 in the 2017 elections. READ ALSO:
#Nepali Congress #crime news #Mohammad Aftab Alam
You May Also like: