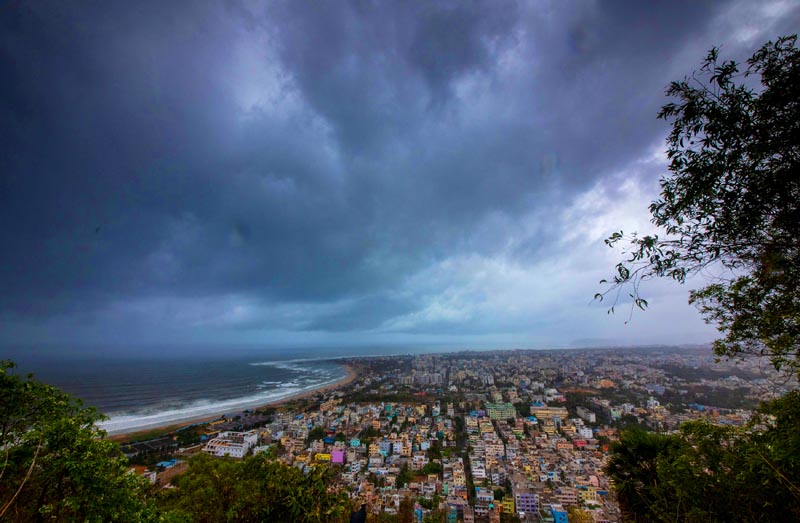 Clouds loom ahead of cyclone Fani in Visakhapatnam, India, on Wednesday, May 1, 2019. Photo: Reuters

KATHMANDU: The cyclone Fani, which is forming over the Bay of Bengal will make landfall on Odisha coast in India by Friday noon.

According to the Department of Hydrology and Meteorology, it is expected that the cyclone will affect the regular pattern of weather in some parts of Nepal. Although the cyclone itself is not likely to make its way to Nepal, light to moderate rainfall coupled with lightning and windstorm will occur in some parts of eastern and central regions today and tomorrow. The weather bulletin issued by Meterological Forecast Department said the cyclone would gradually weaken as it would advance towards the northeast from Odisha coast after landfall today itself. Some moisture will be released towards eastern Nepal as well, more significantly over bordering areas during its weakening process. The high Himalayas, including the Khumbu region of Nepal, have chances of moderate to heavy rainfall. Moreover, a few parts of the western region are likely to receive light to moderate rainfall this afternoon due to the impact of westerly winds. “The weather is expected to return to its normal cycle from Sunday onwards,” MFD informed. Meanwhile, Meteorological Department of India has classified Fani as an ‘extremely severe cyclonic storm,’ equivalent to Category 3 or 4 hurricane and said that it would land with sustained winds of more than 160 kilometres per hour (kmph) and gusts of up to 200 kmph. Additionally, The National Emergency Operations Centre has issued a weather warning on the possibility of heavy snowfall in the eastern Himalayan region. "Since there is a possibility of heavy snowstorm in the eastern Himalayan region, we request that all helicopter flights be suspended from the time of issuance of this notice till tomorrow. We also request the tourists/travelers visiting the area to stay safe," the notice read. (Updated) https://twitter.com/NEOCOfficial/status/1124179110488494080?s=19
#Bay of Bengal #Nepal #lightning #Nepal weather #Odisha #cyclone fani #weather in Nepal
You May Also like: