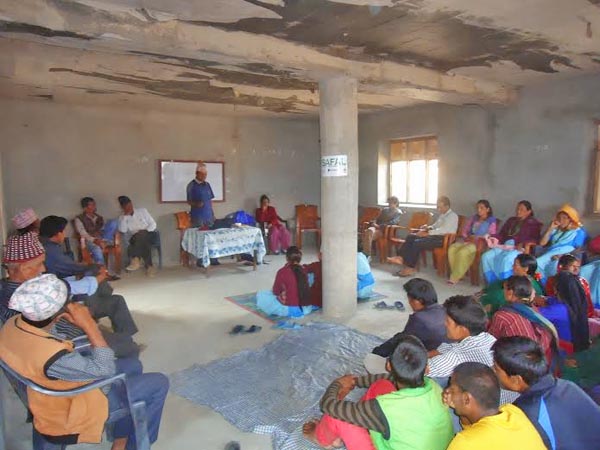 BAJURA: An emergency fund has been established in Barhabisa VDC of Bajura district to support HIV-infected people.

According to VDC Secretary Keshav Raj Puri, the fund jointly established by the VDC, local political parties and Food-first Information and Action Network(FIAN) Nepal will help the HIV-infected people for their treatment as well as availability of nutritious food and food security.

The right to survive has been violated as the condition of 32 HIV- infected people in the VDC is very bad, he said.

Kul Rawal, In-charge of Barhabisa Health Post, informed that they have started the campaign with a view that their small help will be a big support for them.

With the help of VDC, local people and staff; the organisations have already collected more than Rs 31,000 within a month since its beginning.

Mina BK, one of the HIV- infected, hoped that their life would be easy after getting supports from the fund.

The government has provided medicines free of cost for HIV people. However, local people visit Martadi, the district headquarters, for them, and it requires an expense of around Rs 1,500 for a month.

Another HIV- infected Jala Rawal informed that their worry has been reduced after the fund helped them manage expenses for their medicines.

It has been agreed that the fund can be used only after consent from the VDC, local political parties and affected persons.

According to the District Health Office, the highest number of HIV-infected people resides in Barhabisa. It has 70 infected people, including 31 currently taking antiretroviral medicine.