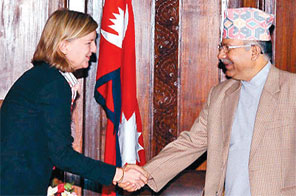 KATHMANDU: United Nations Mission in Nepal has expressed its concern about the delayed process of integration and rehabilitation of Maoist combatants.
UNMIN Chief Karen Landgren today met Prime Minister Madhav Kumar Nepal and inquired about the progress made in the integration process.
After the meeting, Landgren said, "Technical committee is doing its job. However, the Special Committee on the supervision, integration and rehabilitation of Maoist combatants has not met since September 17."
She said the PM assured her that he would hold meetings of the Special Committee on weekly basis soon to speed up the process of army integration. Landgren advised the PM to hold the meeting of Special Committee on a regular basis. Karen added that UN's Security Council wanted to see the integration and rehabilitation of Maoist combatants before UNMIN's term expired in January.
If the parties fail to complete the task of integration and rehabilitation within three months, UNMIN's tenure will have to be extended yet again.
Landgren told Nepal that all parties should respect and abide by the Comprehensive Peace Accord to lead the peace process to a logical end. She said the parties should desist from making statements that might hit the peace process. She also drew PM's attention towards Defence Minister Bidaya Devi Bhandari's recent remark on reviewing CPA and enlisting fresh recruits in the Nepali Army. She said, "Additional recruitment by either side will breach CPA."
Bhandari has been saying that some provisions of CPA should be reviewed to pave way for fresh requirement in Nepali Army and the purchase of weapons.
Landgren added that the process of discharging minors and disqualified combatants was a step in the right direction. She said, "UNMIN is optimistic that the process will move smoothly."
Nepal assured Landgren that government was committed to the CPA and respected it. Nepal told Landgren that Bhandari's remark did not represent official stand of the government.
UN Security Council will review the peace process of Nepal in the first week of November and Landgren is busy meeting different stakeholders before leaving for New York to participate in the Security Council meeting.

#Expedite army merger process: UNMIN
You May Also like: