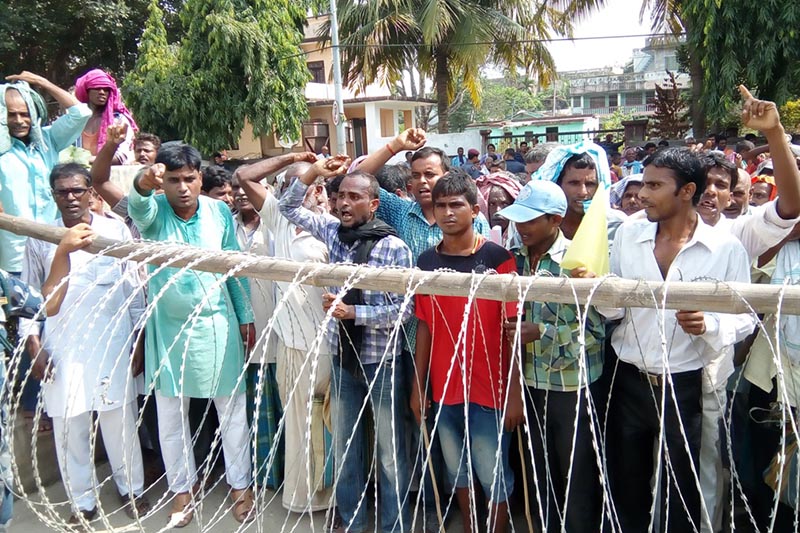 Flood victims from Hajaminiya and Pathara villages of Rajdevi Municipality staging a demonstration demanding relief materials in front of the District Administration Office, Rautahat, on Thursday, August 31, 2017. Photo: THT
Rautahat, August 31 Flood victims of Hajaminiya and Pathara villages of Rajdevi Municipality in Rautahat today picketed the District Administration Office, demanding relief in the wake of the recent natural disaster. Citing that they were left out during relief distribution earlier, the agitators staged a demonstration and chanted slogans demanding immediate relief and assistance for reconstruction of their flood-damaged houses. The demonstration lasted about one-and-a-half hours. The Dalit community was affected most by floods in the district. “My wife is blind and my sons are too young to work now. I don’t know how to look after my family after the floods swept away my house with everything in it,” lamented 60-year-old Jinis Baitha of Pathara village, pleading for help. The agitating flood-victims agreed to end their demonstration later today after the administration assured them that their demand would be met. Federal Socialist Forum-Nepal’s central member Yogendra Yadav remarked that relief was distributed to flood-victims in a partial manner. “As people have alleged that relief was provided earlier only to the kin of some influential people, a thorough investigation into the allegation should be carried out,” he demanded. Chief District Officer of Rautahat Uddab Bahadur Thapa, however, maintained that only a few places had been missed out while distributing relief earlier. He added that the local administration would distribute relief in those places.
#natural disaster #flood victims #Rautahat DAO #Rautahat District Administration Office #Rautahat flood victims #Rajdevi Municipality #Hajaminiya #Pathara villages
You May Also like: