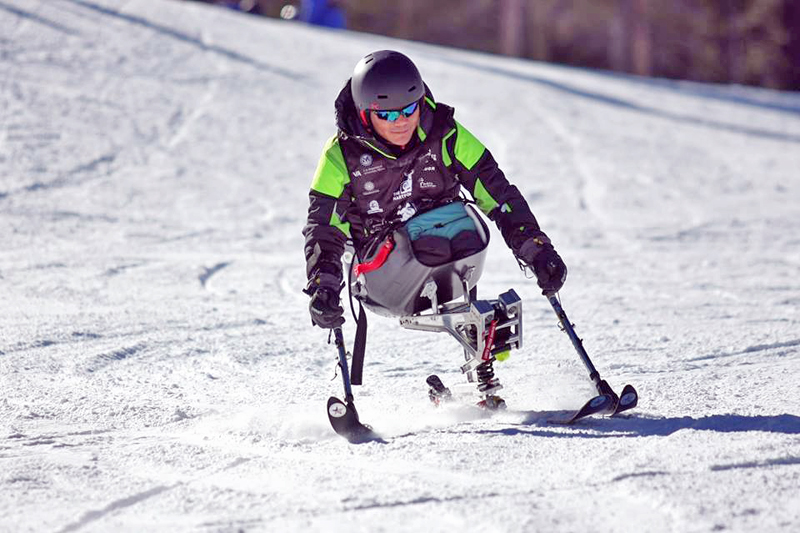 In this recent photo, Hari Budha Magar skis on a mountain in Colorado. Photo Courtesy: Hari Budha Magar
Kathmandu, December 17 A former British Gurkha soldier who lost both his legs in Afghanistan says that he plans to stand atop the world’s highest peak in 2018, breaking the boundary of disability. Talking to this daily, Hari Budha Magar, 37, today said he would leave for Gosiakunda region in a few days to attempt to climb Surya Peak (5,145 m). Besides making an attempt to climb the peak, the ex Royal Gurkha Rifles soldier with prosthetic legs will also take part in a ski race to train himself for the upcoming challenge. “I am planning a feat that no double amputee above the knee has done yet on Mt Everest from the Nepal side in the spring season,” he said. Budha Magar, a permanent resident of Rolpa district, said he wanted to be a role model inspiring people, not only those who are physically injured, but also to show the world the courage and determination that physically impaired people have. Budha Magar served for the Crown with the RGR for 15 years then was medically discharged from the rank of Corporal from the army in 2014 due to injuries sustained while serving in Afghanistan in 2010, after losing both legs above the knees. The father of three, who arrived from UK yesterday, said that sports and challenges gave him confidence in life after the physical injuries. “I want to show the world that people with physical disability can do everything they did before the injuries,” he said, adding that he considered his injury as an opportunity not as a weakness. According to him, he already has a plan to attempt to climb Mont Blanc, Mt Rainer and Mt Manaslu in 2017. “It’s very important to be in different mountains before heading to Mt Everest,” he said, adding that he had already successfully conducted skydiving, alpine skiing, rock climbing and kayaking in different countries including the US, Germany and France. “I am aware of the risk of climbing, but the fear factor doesn’t matter to me.” Budha Magar is a man of courage and determination, Krishna Thapa, managing director at Himalayan Ski Trek that locally manages his expedition, said, adding that the US-based Myrmidon Expeditions would handle the ‘Conquering Our Dreams’ expedition for Budha Magar and a team of fellow combat veterans.
#BRITISH GURKHA #Hari Budha Magar
You May Also like: