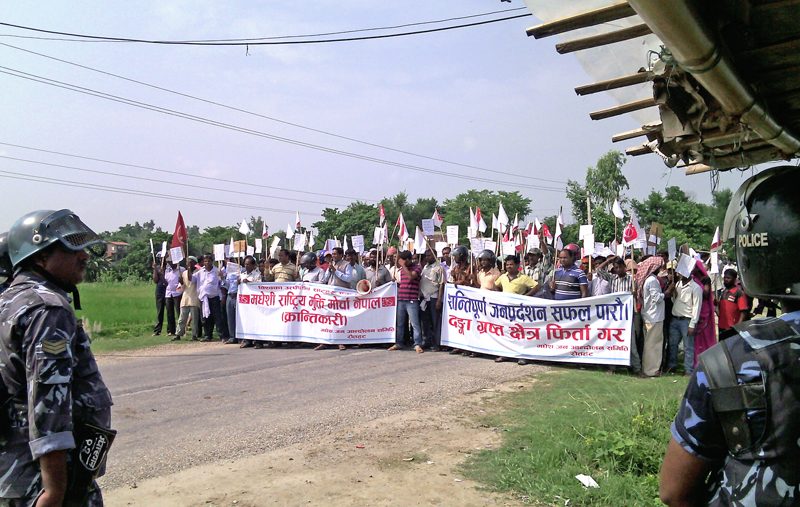 Madhesi Rastriya Mukti Morcha Nepal-Revolutionary demonstrating with the demand that the declaration of riot-hit area be scrapped, in Gaur, Rautahat, on Thursday. Photo: THT
Rautahat, September 3 Rautahat police today arrested at least four persons when Unified CPN-Maoist aligned Madhesi Rastriya Mukti Morcha Nepal was demonstrating with the demand that the declaration of Rautahat as riot-hit zone be revoked. The agitating activists clashed with security personnel while they were demanding withdrawal of declaration of Rautahat as riot-hit zone, end to discrimination against Madhesi people and the rights of the Madhesi denizens at New Buspark of Gaur municipality. As the agitating cadres of the party tried to enter the prohibited zone, police arrested Upendra Sah, xentral vice-chair of Madhesi Rastriya Mukti Morcha Nepal and Rajesh Sah, Sunil Sah and Jay Prakash Kaushal, said DSP Sudhir Raj Shahi. The state had declared Rautahat a riot hit zone after a violent clash on August 24 in Gaur. But the protesters alleged that the riot-hit zone declaration was to suppress Madhesi people’s voice. They staged the protest today claiming that the government had no ground for declaring riot-hit zone. The party charged that the government had declared the area riot-hit to terrify locals. Vice-chair Sah said that the government had arrested them during their peaceful agitation to suppress their genuine demands.
#UCPN-Maoist #Rautahat #violent clash #Madhesi Rastriya Mukti Morcha Nepal #riot-hit zone revoked
You May Also like: