Ghalegaun aspiring to be better 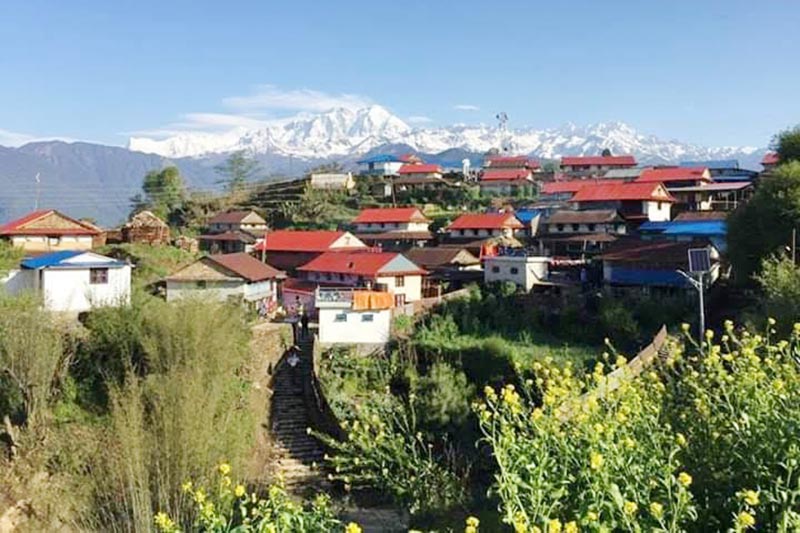 A view of Ghalegaun in Lamjung, on Wednesday, May 1, 2019. Photo: THT
Ghalegaun, May 1 A model tourism village in the entire SAARC region, Ghalegaun in Lamjung’s Kholosothar Rural Municipality has changed of late. The village has got a new face now after the old zinc sheets serving as roofs for the houses were replaced with red zinc sheets. Ghalegaun came to the limelight as Asia’s model tourism village due to development of internal tourism of two decades. Now, the village is emerging as the first smart village in the country. “It was the same target of becoming a smart village, that led to the replacement of the old zinc roofs with red zinc sheets, which has given a new and refreshing look to the village,” said Tourism Management Committee Rural Tourism Ghalegaun Chairperson Prem Bahadur Ghale. According to Ghale, the provincial government had provided 2.9 million rupees to the village for installing new roofs with zinc sheets of the same colour. “Besides the nearly 3 million rupees from the provincial government, Kholasothar Rural Municipality also gave us 1.5 million rupees for the same,” he added. It was the provincial government here that had brought the concept of developing Ghalegaun as a smart village. Now, all 120 houses sport red zinc sheets on their roofs. The village is rich in art, culture, tradition, besides its richness in natural beauty. “Besides changing the roofs of houses, other required infrastructure such as building and repair of steps on the way and flower planting are also happening in the village as per the smart village concept,” said Tourism Management Committee office Secretary Dhirgha Ghale. “While work is on to manage the existing Gurung Museum, work is also under way to manage the existing sheep sheds and tea gardens,” Ghale said, adding that the estimated cost of the smart village concept is around 10 million rupees. Situated at 2,100 metres above sea level, Ghalegaun has been running home stay facility since 19 years. There are 34 houses that provide home stay service now. Ghalegaun is 24 km from Besisahar. Anyone visiting the place can enjoy the beautiful landscape and mountains and observe the rich cultural heritage here.
#Lamjung #Ghalegaun #Kholosothar Rural Municipality
You May Also like: