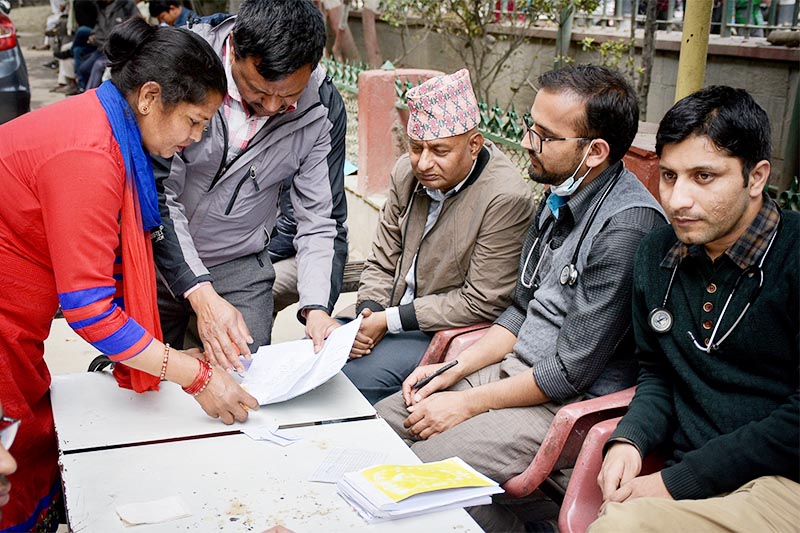 Doctors checking patients outside Bir Hospital as part of their protest, in Kathmandu, on Wednesday, April 10, 2019. Photo: Naresh Krishna Shrestha/THT
Kathmandu, April 10 It has been six days since the doctors working for state-owned hospitals stopped seeing patients — except those who are brought to the emergency department — to exert pressure on the government to revise the decision to hand over the authority to transfer them to provinces and local levels. But neither the government nor doctors have budged from their stances, affecting patients from low- and lower-middle income groups. Most of the patients who visit state-owned hospitals are those who have to make do on a meagre income and cannot afford to visit private hospitals. Blanket refusal of doctors to attend to these patients has put them on the receiving end. From today, these protesting doctors have started seeing patients, but not in their cabins. At state-owned hospitals like Bir, doctors were seen attending to patients in open spaces on the premises of hospitals. This token gesture may have partially addressed problems of patients with minor health problems, but those who had to undergo laboratory tests and surgeries were left high and dry. Pushpa Thami, for example, was admitted to Bir Hospital on March 31 after her thigh started swelling and blood started passing from stool. The 26-year-old from Dolakha was told that she had problems in kidney and must undergo a surgery. But doctors have not performed one. “If we had enough money, we would have visited a private hospital. But we can’t,” said Pushpa’s sister Santoshi. People like Thami travel for hours and even days on limited budget to visit a state-owned hospital. So, when they do not get service on time, they run out of money. Bishnu Maya Khadka, a 65-year-old from Ramechhap, has been visiting Bir Hospital for the last five days hoping to meet doctors who could explain the pain in her lower abdomen. But she has not found one. “The pain is going up every day and so are the hotel bills,” said Khadka. Today, the police even used force and opened the ticket counter at Bir Hospital — which receives nearly 1,800 patients a day — to provide medical services to patients. But doctors refused to provide complete service. “We will not enter our cabins to provide service to patients until the government addresses all our demands,” said Dipendra Pandey, president of the Government Doctors’ Association of Nepal, which is leading the protest. Doctors hired by the government have been protesting since Friday demanding that the federal government retain the authority to hire and transfer all doctors working in the country. The federal government, however, has transferred this authority to provincial and local governments as well following enactment of the Civil Servant Adjustment Act. The GODAN has been saying the permission granted to provincial and local governments to hire and transfer doctors will severely hit their career prospects as they will be restricted to certain provinces or municipalities for long. “The demand of government doctors contradicts the constitutional provisions. So, we will not address those demands,” said Minister of Federal Affairs and General Administration Lal Babu Pandit. He also said fears about “career prospects as cited by doctors” were baseless because “the law allows doctors who have been transferred to provinces and local levels to return to the centre”. “We are not going to tolerate these acts,” said the minister, adding, “If they can’t provide service to the public, they should quit their jobs. Those resignations would be approved immediately.”
#doctors' strike #Doctors' protest #government doctors
You May Also like: