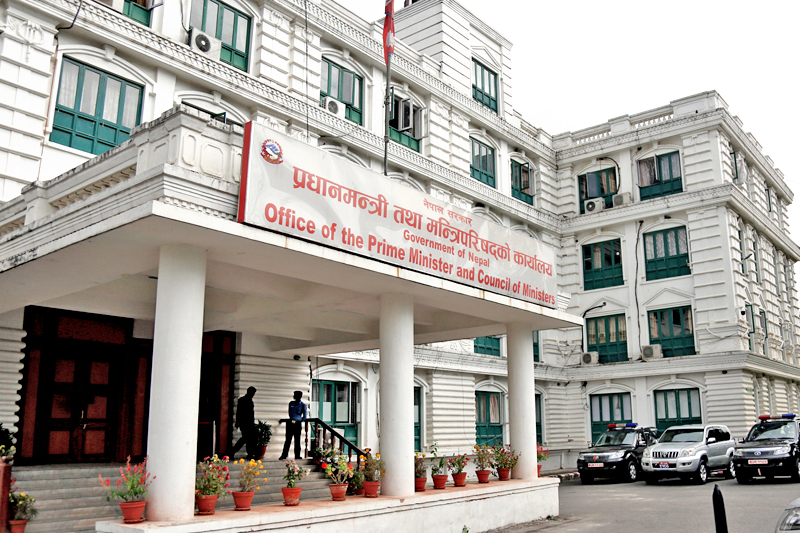 The Office of the Prime Minister and Council of Ministers in Singha Durbar as captured on Friday, October 14, 2016. Photo: RSS
KATHMANDU: A Cabinet meeting held at the Office of Prime Minister and Council of Ministers at the Singha Durbar on Monday has decided to reschedule the second phase of local polls on June 23. A meeting of the Council of Ministers decided to postpone the second-phase election on June 23 in a bid to taking political parties which did not participate in the first phase local elections participate in the second phase of local polls, according to Minister of Information and Communications and government's spokesperson, Surendra Kumar Karki. Karki also informed that the decision was taken considering a month-long Ramadan Festival of Muslim Community. The proposal would be tabled at the Legislature-Parliament for discussions, added Karki. Meanwhile, the Cabinet has also passed the particulars of the income and expenditure for the fiscal year 2017/18. Earlier, the local level elections were held in 34 districts in Province number 3, 4 and 6 on May 14 and second phase elections were slated for June 14. However, the second phase of elections would be held in remaining 41 districts in Province number 1, 2, 5 and 7 on June 23. READ ALSO:
#budget #Legislature-Parliament #Cabinet meeting #Nepal government #Muslim community #Surendra Kumar Karki #local level elections
You May Also like: