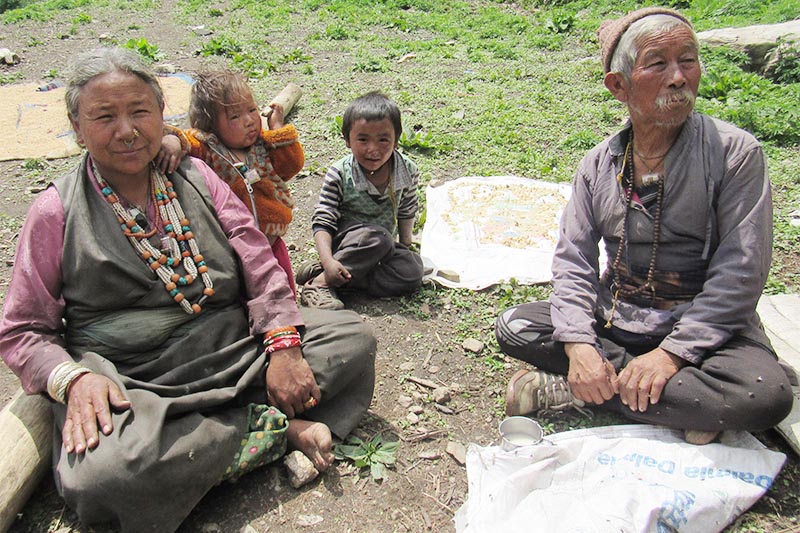 Locals of Gumba village in Himali Rural Municipality, Bajura, on Thursday, April 18, 2019. They don’t have citizenship certificate as they do not know why they should obtain it.
Bajura, April 18 Almost all the locals of Gumba village have been deprived of citizenship certificates due to lack of education and transportation service, at Himali Rural Municipality, Bajura. The locals have to walk for almost one week to reach the district headquarters to make citizenship cards. As many as 60 persons in the village, who are above 18 years-old and have not registered their names in the voters’ list, have not received their citizenship certificates. Ward No 3 Chairperson Jagat Bahadur Lama said there were three small human settlements in Gumba Village. Four families have been living in Phuli Gumba, 14 families in Gumba and seven families in Chyachore of the rural municipality. Altogether, 200 people reside in the village. Tokang Gurung, 62, a local, said he could not reach Martadi for the citizenship card. Explaining his plight, he said “There is no one to carry me to the district headquarters for the citizenship card.” Almost all the youths of  Gumba have not yet got the cards. Kalchang Gurung, 26, did not make the citizenship card. He says he does not know about the use of the card. Some people got their citizenship cards along with voter identity cards, but many did not. Another local Doma Gurung said that they could not reach the office due to the long distance they had to walk and also the fact that staffers were hardly ever present in the office. The locals have not even registered birth, death and marriage in the office. Pasang Lama, a local volunteer said villagers do not know where births, deaths and marriages are registered and why. Prem Singh Gurung has nine children and he has not registered their birth till date. He even did not register his marriage and the death of his parents. “I don’t know where to register and why I should register events such as death, birth and marriage,” he added. The villagers said that the secretaries did not live in the village and they were not in the office. They added that they did not know that it was necessary to register social events. The villagers are backward and they are also deprived of state facilities. Assistant Chief District Officer Khagendra Bahadur Malla said that people in far-flung areas were deprived of state facilities. He added that his office is holding discussion on distributing citizenship certificates to villagers.
#Bajura #citizenship certificate #Himali Rural Municipality #Gumba village
You May Also like: