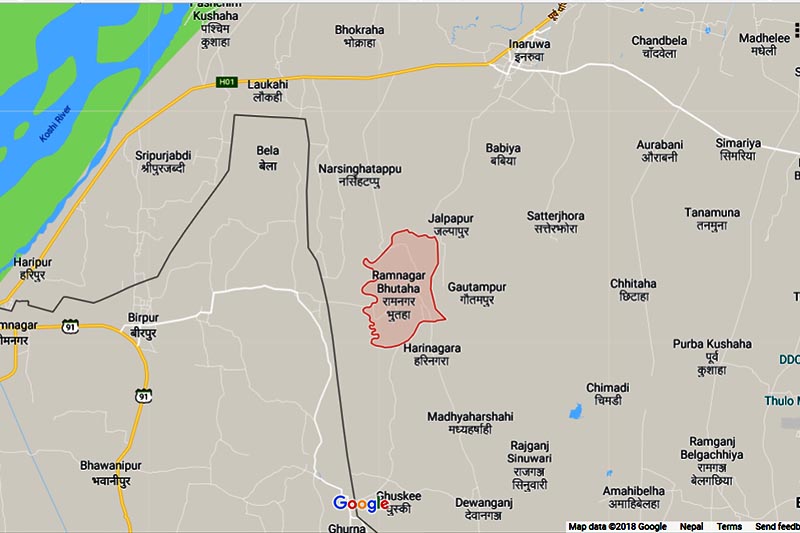 Image: Google Maps
KATHMANDU: Two persons riding on a motorcycle have shot dead a person in Ramnagar Bhutaha area of Harinagara Rural Municipality-2 in Sunsari district today. Locals have identified the deceased as Khurshid Aalam, principal at local Raiyan Boarding School. Sunsari district police chief, Chief District Officer (CDO) among other officials could not be reached or contacted immediately. However, Sunsari CDO, Prem Prakash Upreti told a live telecast, two men riding on a motorcycle approached 'Khurshid Miyan Ansari' and the pillion rider fired four shots from a gun at his head, killing him on the spot at around 11:30 am today. According to him, the deceased was a member of the National Boarding School Management Committee. He said the incident site was located about 10 to 12 kilometres (km) east of the Indian border in Nepal. According to the CDO, the check post at Ghuski, at a distance of about 2 km from the border, was ordered to check any motorcycle with Indian registration. Subsequently, the armed group also fired at Nepal Police personnel stationed at the check post who tried to stop them from entering Indian territory after the shooting of Aalam. One of the security personnel identified as Constable Shiva Lal Paudel got shots on his right thigh, waist and back as both sides exchanged fire. The injured has been sent to a health institution for treatment, according to the CDO. Following the incident, the Nepal-India border has been sealed while Superintendent of Police (SP), one each from Nepal Police and Armed Police Force of Nepal, have been holding a meeting with Indian Seema Suraksha Bal (SSB) officials, the CDO informed. Police have yet to establish the motivation of the unidentified group who shot dead the Nepali citizen.
#Sunsari shooting #Indian gunmen #Indian gangsters #shot dead in Sunsari #Khurshid Aalam #Khurshid Miyan Ansari
You May Also like: